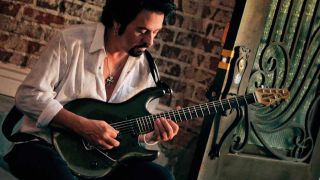 "George Harrison, I Saw Her Standing There - that was the one where I said, 'I want to be that guy'" (Image credit: Rob Shanahan)

Break on through to the other side…

"A breakthrough moment? Oh, that's easy - George Harrison, I Saw Her Standing There. Off The Beatles' first album, that was the one where I said, 'I want to be that guy.' The sound of that to a kid who was seven or eight - by today's standards, it's tame - but at the time there was nothing like it. That just ripped into my soul. That touched me deeply and I was able to tell George that because we became friends later in life."

"It's been 10 years since [Toto] did a record and there's a lot of expectations. It was born out of litigation, and there was a lot of clouds around this and we wanted to go: 'Okay, if we're gonna do an album, it better be fucking good ideas just to dispel the myth that old guys don't have any fresh ideas, or that we're just rehashing some riffs to throw out there so we can go play the hits and get paid on the road.'

"We weren't gonna do that. Because it took 10 years, and in 10 years who knows if there's gonna even be a record business? So we wanted to at least come back strong and play to our audience. We didn't try to say, 'Oh, let's get some rappers in here - let's find out some new artist and be relevant…' Fuck that shit - we just want to be us. If you like us, then you're probably going to dig this."

"It's so funny because I was doing a charity event last Monday night, and it was like Billy Gibbons, Slash, Sambora, Orianthi, myself, and we're standing there with all these guys and I'm looking around and nobody's drinking at all and there's no partying. We're all going, 'Yep, we used to be carried out of every place we went and now we're all back to having a water and everybody talking very softly and mature.' Still having a lot of laughs, though.

"I like to feel good every day and I'm so glad that I found my brain again, and my soul. And I think we all feel that way because rock 'n' roll can suck you in and spit you out. Try going on the road for 40 years for 200 days a year. It's a mind-fuck."

Bring it on home…

"Michael Landau and I grew up together since we were 12 years old; he's one of the most brilliant guitar players in the world. He's also one of my oldest friends. We sort of pushed each other in a very healthy way. And I went right, he went left, and there was a point where we grew up writing and listening to the same things, practising together and playing in a million bands together.

"We were the two young guys who could play real good in the LA Basin at that time. And we were these two little kids - it'd be like, 'Who are these two little fuckers who can play like that?' It was pretty funny. As technique moved on with all the prog shit, we learned it all. And whenever you heard something you couldn't play, you wanted to figure it out.

"So we had to seek people out - there was no internet to do that. You either picked it off the record or you found somebody who played it right. It was usually older guys. But it was a lot harder to get it together back then."

Listen, do you want to know a secret?

"Don't be afraid to make mistakes, because any great player will tell you that any night they'll make mistakes. Whenever you do a live recording, it's always the shittiest night, and you have to wince through it for the rest of your life and then you go, 'Fuck! Why did I shit the bed, man? We were recording!' And you gotta go, 'Nobody's perfect' - and we all feel that way. Ask any musician."