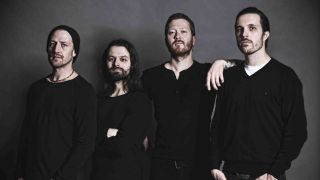 Long Distance Calling may have established themselves as one of Germany's premier instrumental exports, but throughout their career, the band has never been afraid to experiment with vocals - and new release Trips is no exception.

Spanning post-rock, metal-edged prog and '80s synth-rock, the band's latest LP is unashamedly eclectic, but at its core remains the rock-solid guitar work of Florian Füntmann and David Jordan, who are as adept at conjuring delay textures as they are ripping pentatonics.

Here, Florian gives us the lowdown on how he'd like to improve his playing and the hell he's put his favourite Les Paul through over the years…

"My first acoustic guitar I got as a present from someone who was working as a mover. The family who were moving wanted to get rid of it, and he knew that I wanted to learn how to play guitar. I think I was 10 years old.

"I got my first electric guitar when I was 12 or 13, which was a cheap Fender Squier. Not really a good guitar, but good enough to start the whole thing. For someone starting to play guitar, it was totally adequate. Of course I soon started to improve my equipment."

"I think I'd save my Gibson Les Paul Standard 1996 model. I´ve got some other very good older Les Paul Models and a totally awesome custom guitar made by Helliver from Germany, but the 1996 model is special to me for a few reasons.

"First, I got it as a present from my mom (at first I wanted to borrow the money from my mom and pay it back to her, but after a while she decided to give it to me as a present) when I was 17. Second, the guitar's neck broke twice, and every time the guitar managed to survive. Third, with this guitar I recorded the first demo of my own songs of my first band ever."

"The only guitar I ever did let go was unfortunately my first electric guitar. Like I said before it was not really a good guitar, but it was the one that started everything. After I got my Les Paul, I thought that there is no need for keeping this old piece of shit. I was wrong…"

"I didn't really think about this. Last year, I bought a very expensive guitar, and I think my stock of guitars is very satisfying at the moment. I'm thinking about buying a good amp for clean sounds, but there is nothing specific yet. The search for the ultimate satisfying guitar sound is an endless one…"

"I'd like to be a better solo/lead player. I think I'm okay at playing rhythm guitar, which was always more interesting to me. That may be the reason why I never really practised scales and solo stuff. My right hand is pretty fast but my left hand is a bit lame."

"Having a smoke and walking/jumping around backstage to get my bones and my mind in the right mood. When the intro starts, we high-five each other and enter the stage."

"Being happy about a good show or complaining about things that went wrong. And, of course, having a beer and a smoke. The most important thing is to get rid of my soaking wet clothes immediately, because I sweat like hell on stage. Sometimes I'm disgusted by myself, haha."

"I guess I'd take an acoustic guitar with me and a never-ending amount of strings."

"Last year, I was playing a small festival with my other band and there was something wrong with my strap lock. After the intro stopped, I played the first note on the dropped E string and wanted to strike the ultimate rockstar pose by throwing both hands in the air. The guitar fell to the floor and the neck broke before the show really started. That´s how the Les Paul's neck broke the second time. This will never happen again!"

"Practise a bit more of the theoretical stuff. It's boring, but it helps you to be a better player."

Trips is out on 29 April via InsideOut Music. Long Distance Calling tour the UK in May: