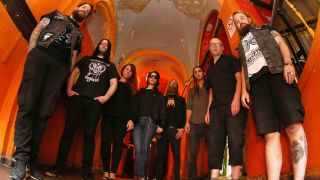 Crippled Black Phoenix have become something of a prog institution over the years. Now nine albums in, multi-instrumentalist Justin Greaves' ever-evolving project continues to redefine itself with each successive full-length.

New release Bronze takes the band's hazy brew of post-rock dissonance and driving rock riffage to new heights, destined to be elaborated upon during the band's European tour next month.

Before he boards the tour bus to Manchester, we quizzed CBP's mastermind on his all-important first guitar, favourite effect and discovered why he wouldn't last long in a house fire…

"I didn't own a guitar myself until i started Crippled Black Phoenix. It is a Gordon Smith SG, it is still my fave!"

"All of them! I hate having to let go of gear and guitars... But mostly the Selmer lead/bass tall combo with the old original spring reverb in the back."

"Yesterday. I played my guitar by myself... just jamming new ideas."

"Lead solo stuff, y'know, the widdly widdly! All the rhythm stuff and spooky melodic stuff, no-one can beat me, but I am rubbish at shredding!"

"The obvious answer is probably David Gilmour. He plays with such feel; my favourite stuff he does is the gentle slow-hand, pitch-bending blues, and the fact he plays so clean.

"Most good guitar players can turn up the volume and shred and make massive sounds - not many can control it like DG. I also happen to think Abbath is both very clever and very crafty in equal measure."

"I could say the obvious glaring mistakes on the fragile parts I play by myself... but actually, I'd say the worst thing to happen is sharing the stage with ego rock stars and drunk buffoons."