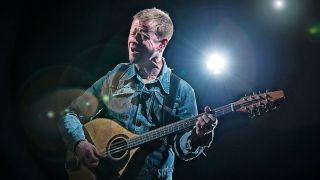 He's the guitarist and multi-instrumentalist with folk superstars Bellowhead, but how will he fare when we serve up the 10 questions we ask everyone?

"It was a fairly cheap classical guitar, a gift from my parents to me and my older brother. We shared it, although I suspect I hogged it. It was well used; I tried putting steel strings on at one point to predictably bad effect.

"Once it had served its purpose, my brother and I - mostly my brother - covered it with football stickers and it still exists today with that decoration intact."

2. If the building was burning down, what one guitar from your collection would you save?

"The guitar I'd save is my Lowden 025. It's a wonderful thing made in the mid-1990s and was in pretty good nick when I bought it, but I've battered it a bit and it's done a lot of gig mileage, so it looks rather forlorn now. Sounds bloody amazing, though.

"I play bouzouki as well and, while it isn't a guitar, I'd have to save my Andy Tobin acoustic bouzouki and probably the solidbody he made for me as well as it's one awesome thing. I'm used to carrying a lot of instruments around, so I reckon I could pluck three cases out of a burning building pretty quick!"

"Most of my instruments are fairly modern luthier-made affairs, so I don't own anything really ancient. My Strat is a 1983 vintage, so it would be that. The oldest instrument I own is my great-grandfather's Windsor five-string banjo, 1920s, I think. It's not really playable any more, but I did use it for a short time about 20 years ago."

4. When was the last time you practised, and what did you play?

"I'm on tour at this point in time, so I last practised before my last gig. I always warm up a bit, usually just finger exercises. If I'm at home, I can be very bad at practising, although I'm trying to get myself out of the habit. If I get an idea, then I'll be inspired to pick an instrument up and play about with it, but if there's no spark, I find it hard to motivate myself to practise.

"At the moment, I'm playing these acoustic interpretations of Hendrix songs - although not on guitar - so I enjoy going through those. I was hopeless at practice when I was younger; I just used to play what I wanted to play rather than sitting down and doing proper study. I'm much better now and I try to get my fingers working properly, but wish I'd been better disciplined when I was starting out."

5. When was the last time you changed your own strings?

"I always change my own strings. If I'm out with Bellowhead then sometimes the backline tech changes the odd set, but I'm a bit particular. Most instrument owners are."

6. If you could change one thing about a recording you've been on, what would it be and why?

"I would replace the programmed drums on the title track of my 2008 album, Boomerang, with real ones. I always felt that the track deserved a seriously good drum part, but we were against the clock. I'd replace a whole raft of other things as well, but it's not worth going into them all."

"Usually warming up the voice or scoffing Vocalzone [soothing throat lozenges highly prized by vocalists and public speakers]. Or dealing with some technical hiccup. Afterwards, I'll either be out at the merch stand or tucking into some kind of booze."

8. What's the worst thing that has happened to you on stage?

"Umm… I've done all sorts of embarrassing things on stage. I don't seem to have much luck when it comes to technical stuff. I remember one time with Bellowhead when the mandolin I was using decided to completely pack up midsong and make horribly deafening noises that caused the sound engineer to turn everything off entirely, bringing the gig to a bit of an abrupt standstill."

9. What song would you play on acoustic around a campfire?

"Bob The Plumber. A mash-up of ripped-off Pink Floyd and Johnny Marks into one legendary, if inconsequential, story of a short and not particularly popular watery bloke who fixes pipes."

"I don't think I've ever come that close. When the gigs look like they're drying up, I start worrying and thinking about what else I could do to earn a crust, but then I realise that I can't really do anything else.

"I've got to this point without really picking up any other useful skill that I could fall back on if I needed to, so I end up just having to stick with it. Which is fine, of course. I used to do a lot of building to bridge the gaps between gigs, but I was only ever a labourer and didn't get round to learning one of the trades."