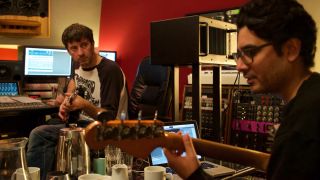 Sharma, who soundtracked Stephen Merchant’s series An Idiot Abroad, had been approached about working on the British writer/director’s new film, Fighting With My Family. “He said he was doing this wrestling movie with The Rock and was I up for it?” says Sharma. “I was like, ‘Of course I am!’”

A sports comedy biopic starring Florence Pugh, Dwayne Johnson, Lena Headey and Nick Frost, the film charts the rise of Norwich-born pro wrestler Paige from the distinctly unglamorous UK circuit to WWE competitor. Merchant requested a “ROCK score” yet wanted a soundtrack that that could both serve the scale of the tale, yet still evoke the spiky, unfinished and - frankly - British belligerence of Paige’s remarkable story. An “A-list guitarist” was required… Enter Coxon, stage left.

“It was a really odd film,” says Coxon. “It was set in Norwich and it was about wrestling. I wasn’t sure whether the whole idea was going to work, really. But I just thought it’d be really good fun. Then as I started to see clips, I just really warmed to the film and found it really, really funny…”

You’ve said British punk became “the gene pool” for this soundtrack. Why was that?

“Finally, we settled on a very stripped-down sound, one that wasn’t adorned. No strings, no piano, no keyboards. That’s why Graham is such a fantastic fit, because he has a way of channeling the energy of punk and turning it into something that’s really melodic and innovative and new. That’s why I asked him to come aboard.”

What sort of brief did you get regarding your parts, Graham?

Graham: “What Vik says is that I can quite easily chug along and do something that sounds a bit like Skids or The Buzzcocks, but it actually has to really fit what’s happening on the film. You’ve got to soak up the action and to respond.

“But then at other times, I was thinking, ‘Their first love is wrestling; it’s not going to be music. So what might they be into?’ It was going to be stuff that was around the charts. So I would just do things in different styles and think what would be agreeable to a wrestler: a big, hard wrestler who’s probably been inside [prison]. For me, it might be things like Rainbow and Thin Lizzy and a bit of punk, maybe a bit of Sex Pistols. Things like that.”

You were excited to meet session legend Dean Parks at NAMM recently, Graham. Are you starting to enjoy that sort of jobbing musician role more?

Graham: “The hired gun? That’s what I’m getting into. I’ve got my black clothes and my cowboy boots out here [in LA], and I walk up and down with the street with my guitar on my shoulder. But no-one stops the car.

“I kind of like that. It’s taken me a long time to grow up, really. I always used to do everything myself; I had a control freakishness. Maybe I should have just been going ‘Look, there’s some really great musicians out there, maybe they’re going to be of use.’ There’s such a lot of amazing guitar players around. Any one of them can do the job brilliantly, but none of them sound like me, and I don’t sound like anyone else. Everyone has their own thing. You want someone to sound a bit like Graham Coxon on your thing, then you’ve got to get me, really.”

That’s the advantage, isn’t it, of honing your own style as a player…

Vik: “That was the thing. Obviously there are advantages to using session players. But there was something about just wanting that energy and innovation and someone who would be able to add their own signature sound to it and improvise. Graham allowed us to have that kind of resource, to have someone that can literally stroll in and, amid this huge cloud of custard tart vape, just plug in and do 30 takes, and it was all fantastic.”

Graham: “What’s good about that is to get to that point with a session musician would be a cold, dry thing. Whereas I think [with Vik and I] it was really easy to feel comfortable, I think with each other, and to take the piss and say, ‘No, that’s shit.’ It was fun.”

The gear was stripped down, Graham, compared to what you’re normally used to. What were you using to record guitar, and what was key to the tone?

Graham: “I just used a lead, that was it. I was like, ‘Where am I plugging into?’ ‘The lead, down there, you idiot! What else?’ I don’t go through much of a palaver setting up. Particularly in the writing stage. I’ll often just use amp simulations or whatever is in Logic, just to quickly get to that tone that you want, instead of fooling around with amplifiers.

“I’m not a huge tone chaser - I get a sound up and then I get going. Because if something holds you up for five minutes, then it’s gone. My brain is like a sieve. If I think of something in my mind that will fit, I need to get my hands on a guitar and work it out and record it quick.”

What was your main guitar for these sessions?

Graham: “I took this rather posh guitar made by Martin Booth, which is an English guitar maker out near Suffolk, which is a couple of humbuckers that can be coil-tapped, with a tremolo arm. It’s a mahogany body, maple top, set-neck-style guitar with a beautiful sunburst finish. It’s a great-sounding guitar.

“I think every now and then, I would sort of throttle a Telecaster. But I think mainly I just brought in that Martin Booth. Because you can do most things with it. You can just play straight with it, you can play single coil with it, you can do humbucker, you can do fat, thin, wobbly, Chris Isaak, or - when you’re told not to do that - take the tremolo arm out.”

In a recent Softube promo you did, Graham, you talked about the advantage of recording without “looking at the music” - the idea you can get caught watching a DAW, instead of listening. How do you avoid that?

Graham: “Yeah, I’ve watched people do it in studios. They do look visually. They notch up a little frequency they think is a bit weird. Then they just turn their head [to adjust it] until it sounds okay. They’re not actually looking at the adjustment; they’re just looking at where it is.

“I’ve learned now, I suppose, to when you’re actually adjusting or notching something out, don’t look. To find it, it is okay to look. Then you don’t look. You should get these blinkers on, like a Shire horse...”

Graham: “Yeah, you should also get ones that go around your ears to expand the range that you can hear, so these big blinkers behind your ear, then there’s blinkers to the side of your eyes. Actually, don’t tell anyone about that, I might patent that...”

Vik: “It’ll just be like a cardboard box with two eye holes cut out of it.”

Graham: “It’s going to look much better than that…”

Not just a cereal box on the head, then... Have you noticed any changes, Graham, in terms of your approach to gear and selecting gear over the years? It seems like you’ve become quite minimalist…

Graham: “I don’t know. I’ve never been really geeky about it. I’ve never really changed my gear up, particularly in the last 20-odd years. I’ve still got the same amps I used with Blur, the same pedalboard, near enough. But recently, in the last five or 10 years, the pedal thing has gone really, really mental.

“I have looked at new pedals and everything. But really, I go back to my default setting, which is a nice fat, valve-y Brit-style amp. Like a Marshall-y kind of thing. Or I like the Morgan amps, if I want something a lot more punchy that’s a bit like a Vox.

“Years ago, I was doing other stuff too much to worry about it. What I had worked, and that was it. Now, I don’t think I’ve got time to geek out and fiddle about. I like it when people say ‘This is good’, and they push it my way. I really am not too geeky about it. My [guiding principle with] guitar tone was always, ‘If it sounds like it’s been on Abbey Road, then it’s good.’ That’s my thought. It always works.”

So the Tele and the Marshall are well established. Are there any pedals that you can’t live without?

Graham: “Really, if I’m using the Line 6 Helix, then I’ve got so much at my disposal, amplifiers, cabinets, effects pedals, distortion units, all the rest of it. But if I’m going to be purely analogue, then I reckon the Broadcast pedal is one that I wouldn’t be able to do without. It’s kind of like a fat preamp for a guitar. Almost like a 1073 for a guitar. Hudson makes it, in Northern England. All of his pedals are brilliant.

“[Also] the ThorpyFX pedal, his big Fallout Cloud one, his massive fuzz one, that’s one of the best pedals I’ve ever heard. Those are pedals that are just excellent, which I really do like to have knocking about.”

Graham is known for championing US influences [amid the Britpop boom]. Did you guys have any empathy with Fighting With My Family’s wrestler protagonist Paige, in terms of growing up, looking to the US for your calling?

Vik: “You can’t help but be influenced to some extent. But as far as this film is concerned, in terms of deliberate attempt to move away from that polished, very produced, very slick sound that is part of the WWE, that kind of incredibly glamorous and popular wrestling that takes place in the US that gave us The Rock and people like John Cena and Dave Bautista. We wanted to move away from that. We wanted something that was very much part of what we thought was British, and set itself apart from that sound.”

Were you aware of any feedback from the US against that idea, given The Rock’s involvement and so on?

Vik: “I think Stephen had to push quite hard for it. I think that Stephen had a vision, he had this idea that it was always about the things that Paige was made to feel different for being, turned out to be the very things that made her unique and transformed her into something special and someone special. It helped her edge and her grit, the fact that she was unfinished in a way, and not glamorous, that was all added to part of her uniqueness, which this film did celebrate, I think.”

Is film soundtrack/composing the ultimate outlet for the introvert musician?

Vik: “For me, I’ve played out and I’ve always been appalling at it. I shoegaze. I find the studio is my natural habitat. For someone like Graham, he’s a fantastic performer, and he’s brilliant at what he does. Making music for film, that’s the ultimate for me.”