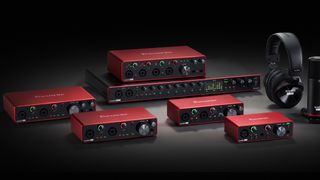 We’re not going to sit here tell you that your audio interface is the most exciting piece of gear in your studio - it’s built for function rather than fashion, after all - but what you can do with it is pretty special.

It’s the box through which all your musical ideas flow: from your recordings at the start of the production process, to the final mix at the end of it.

Focusrite knows this all too well, and the company has recently taken another step forward by releasing the Scarlett 3rd Generation range of audio interfaces - the best-sounding Scarlett devices yet.

Each model includes the 3rd Generation mic preamp, which is capable of emulating the Air effect from Focusrite’s original ISA mic pre to add a little brightness and space to your sound. Other features include 24-bit/192kHz converters, super-low latency and gain halos that make it easy to set levels, while connectivity is via USB-C.

These are just specs, though: what you really want to know is what the new Scarlett interfaces can do for your music. So, Focusrite has worked with a range of artists to show you what five of the new models are capable of.

Check out the videos below to see what the 3rd Gen Focusrite Scarlett Solo, 2i2, 4i4, 18i18 and 18i20 can do, and to discover that, whatever kind of music you make, there’s a Scarlett audio interface that’s right for you and your studio

It might be the simplest interface in the Scarlett range, but as Sam Bell demonstrates, the Scarlett Solo has a lot to offer.

Karun shows that recording vocals and guitar simultaneously is no problem if you have the new Scarlett 2i2.

Unglued demonstrates that the 4-in/4-out Scarlett 4i4 is more than capable of handling drum 'n' bass production.

The versatile Scarlett 18i20 lets you turn any space into a fully-fledged recording studio, as Tom C. Walker and his band discover.