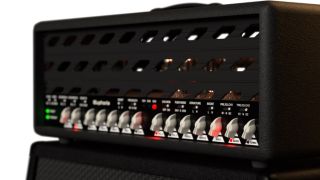 With thousands of varieties of amp simulator software on the market, it can be hard to know which one is best. But Mercuriall Audio's new Euphoria software has some serious credentials to its name.

It's based on the iconic tube guitar amplifier Bogner© Ecstasy 101B – one of the most versatile and expensive guitar amps ever made, with a huge array of different sounds. These include a crystal clean Fender®, the edge of breakup VOX®, overdriven Marshall®, and thick Hi-Gain. Without doubt, it's one of the most desirable guitar amps in existence. And now its abilities are available in virtual form.

This means you can create sounds with no barriers. With 12 power-amp settings and even more preamp switches at your disposal, you can create the exact tone you're after and integrate it naturally into your own music style. It's music making without compromises.

There's even an optional Cameron factory mod, which puts the amp on steroids. Really going for it? This is the option for you.

It's the closest thing to having an actual physical amp in your home studio. That's because the analogue circuitry has been precisely replicated and simulated using a unique state-space modelling technology that uses neural networks. Mercuriall Audio is the only company in the world to use this technology in this way. Its custom tech has shown great results in SS-11X and it's improved it even more for Euphoria.

Euphoria is also one of the easiest-to-use amp simulators, thanks to the new window-based user interface. By mimicking familiar Digital Audio Workstation usage logic, it lets you freely move module windows and place them wherever you like within the plugin. Innovations include a hide/show all windows button, as well as options to undo/redo. If you can use a computer, you can use Euphoria.

But its simplicity belies a very advanced skillset. Indeed, in the future the platform will play host to further product unification, becoming the beating heart of your home studio.

It also puts you in control. You can switch the preamp and poweramp off separately, and there are three plugin sizes, so you can hook it up to your 2K or 4K monitor no problem.

The 2D cabinet is based on Redwirez© impulse responses, which you'll probably know from Mercuriall Audio's earlier releases. But if you prefer, you can load your own guitar cabinet and room IRs.

The preset system features various stomp boxes and spatial effects (including Wah-Wah based on Dunlop® CryBaby® 535Q, and Overdrive based on Ibanez® TS-808), and a realistic 3D interface of the amp and other modules.

And it won't break the bank. Existing customers can pick it up for just $79.99 on a permanent offer. New customers can pay just $89.99 for the first five days after launch, after which the standard price of $99.99 will apply. So it's affordable to a huge number of guitar amp sim enthusiasts.

Welcome to a new era in the guitar sound modelling world.