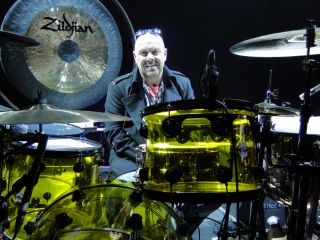 Hey, you'd be smiling too if you could play like Jason Bonham...on a set this beautious! (Image credit: Joe Bosso)

Last fall, Jason Bonham took his dazzling, multi-media Jason Bonham's Led Zeppelin Experience show on the road for what would be a highly successful run. Responding to fan demand, the drummer recently embarked on a second JBLZE tour, and MusicRadar caught up with the heavy hitter before a show at the State Theatre in New Brunswick, New Jersey.

Check out the above video as Bonham talks us through his gorgeous DW Vistalite kit (it's a one-off, folks!), which also includes a Ludwig Anniversary snare and Zildjian cymbals - gong included, of course! In all, it's the perfect setup for a man named Bonham, guaranteed to summon the Hammer Of The Gods.