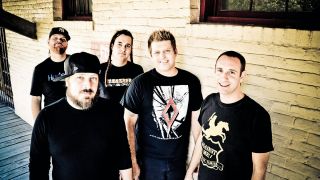 Punk heroes Less Than Jake are back with a brand new live record.

Well, kind of. Live From The Astoria was actually recorded 15 years ago. Drummer Vinnie Fiorello fills us in.

You've just put out a live album from a show recorded at the London Astoria in 2001. Why release that now?

"We wanted to put out a live album and we talked about recording one. One of my favourite live records is Liveage by the Descendents, that record was a direct representation of the band, it wasn't cleaned up in the studio and that's what we wanted. We decided to look back into the archives and we agreed on that show. We wanted something that truly represented us and we have love for the Astoria and we love the UK.

The UK greeted us with open arms right from our first time there. We have tonnes of live material in the vault, there was a time that we recorded every show."

While going through those old shows did you notice an evolution in your playing compared with today?

"What's funny is it's like the saying that the more things change the more they stay the same. I listened to the album and we're 15 years older now, we've been through births of children and all sorts of things but you go back and listen to that album and it's still a group of guys with a cool energy and a good chemistry together as friends and band mates. That's what it is still today."

What kit are you using on the album?

"At that time I was using a hand assembled red sparkle Premier kit with maple shells, 13" tom, 16" floor, 22" kick. It was a 14" Modern Classic snare on that recording. I still use those sizes with my Sonor kit today."

Any plans to record new material?

"We're in the middle of writing material right now for our next release. We may go into the studio, we may not, it all depends on the songs. Regardless we play Warped Tour in the States and we have a show in Montreal prior to that. After that we're just writing songs and staying active."

You said your next release, does that mean it may not be a full album?

"Right now things are undecided with the format. Usually a full-length for us means a specific cycle and a specific idea and vibe. That hasn't presented itself to us right now, to be honest. For us, we might do singles, that's on the table, but it's just not decided yet. We're actively writing songs and the beautiful thing is that we have Roger's [Lima, bass/ vocals] studio at our disposal."

Next year marks 25 years of Less Than Jake, what is the key to surviving in this industry?

"Sometimes it's just not taking yourself too seriously, that has worked for us. We started as a punk rock band that did everything ourselves from making record covers and T-shirts to booking shows. We built this band slowly step by step. We may not have a radio single now but because of the work we put in during those first few years we can still have a career 25 years in because we have that solid foundation."