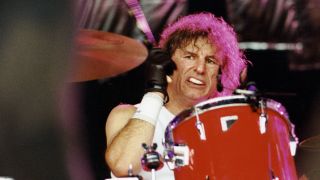 Don Powell, the Slade drummer who has worked alongside guitarist and fellow Slade co-founder Dave Hill since 1963, has announced his departure from the band in a statement on his website.

"Dave has sent Don a cold email to inform him that his services are no longer required," reads the statement, "after working together and being friends since 1963."

"It is with great sadness and regret that Don needs to inform his fans that he now is no longer a member of Dave Hill's Slade."

The band continued to tour as Slade II after Noddy Holder confirmed his departure from the band, one of the most successful acts of the 1970s, in 1992. The group's name later reverted to Slade.

Slade formed in 1966, and enjoyed stellar success through the 70s, becoming the most successful British singles act of the decade, racking up 17 consecutive top 20 hits and six number ones in the UK.

Hill and Powell first played together in 1963, going on to power The Vendors and the N'Betweens, before recruiting bassist Dave Lea and vocalist Holder to form Slade.

Hill disputed Powell's version of events in his own statement on the official Slade facebook page.

"I am sad to announce that Don and I will no longer be working together our parting of the ways has not come out of the blue and his announcement is not accurate," reads Hill's Statement.

"I wish Don every success in his future efforts. I will, of course, carry on and look forward to many future performances and meeting fans."