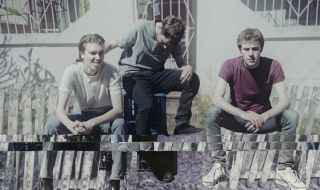 Seekae's star is on the rise

One of a trio of members, we spoke to John Hassel about the band's formation. "We began in Sydney, Australia, back in high school. Originally we were kind of a mish mash of hip-hop and ambient electronica, but we've pushed further into house and 80s music."

Initially compared to IDM pioneers Autechre, what were Seekae's influences when starting out? "We had a huge Warp Records influence - Autechre, Aphex Twin, Boards Of Canada and Plaid were all people we were trying to emulate whilst also taking in electronic music that was more live, like Hot Chip."

Why isn't Australia a country that spawns more electronic artists? "It's not prevalent, but it's easier to be a bedroom producer than it used to be because technology has just got to that point. European cities like Berlin and London are a mirror for the environment, whereas the climate's entirely different in Australia - it's sparsely populated.

"So much core electronic music originated elsewhere, it never really had that anchor to grow from," says John. "In Europe, we're a small fish in a massive pond which is exactly the environment we need to be in to grow as artists."

So what's the band's approach to modern production? "The first album wasn't really a band creation, but +Dome sounded more together. We spent a lot of time on mixing and production which made it sound computerised, but funnily enough it was more live."

Is a third album on the cards, we wonder? "Funnily enough, we've just finished mixing [The Worry]. Again, it's quite a drastic change because we've introduced vocals and almost all of it has been done in a live context."

Given the trio's open-minded, mishmash approach to electronic music, we asked John to pick five of his favourite game changing DJs and explain his nominations…

"He's generally considered to be more of a producer, but he was one of the pioneers at the forefront of bringing acid and electronica into a live DJ context.

"He changed electronica and DJing into something that's more than just dance music; where it's an expression of experimentation and an attempt to find new sounds in an environment that's very centred on reducing the senses; dark, dingy nightclubs where all you're really focused on is the music. I saw him Sydney, or heard him, as he basically deejayed from behind this massive barrier and could have been someone else for all I knew."

"I'm a big, big fan and he was a huge influence on us originally. Again, it's someone who is taking on a genre of music that is relatively familiar, or it seems like there is a set way of doing it, and has manipulated it.

"At first it sounded like he'd fucked it up, but I love the aesthetic he created. I grew up listening to Detroit house and early analogue electronic stuff, but the tape sounds and saturations he does creates this element of something new and fresh that he's really at the forefront of - both in production and as a DJ."

"The first time I heard him was about three years ago. For me, it was a type of music that was so well produced that, for someone who doesn't really listen to much dance music, it made me want to listen to much more... and want to make it.

"From what I've heard, in terms of DJing he's very much on point and someone who treats the sounds so delicately that you can't help but want to investigate further into how he makes them. It's not just dance music, it's a masterpiece every time he makes a track."

"Again, someone who isn't given the right attention or credit he deserves for the influence he had on so much music, and especially DJing for the slowing of tempo that happened in both dubstep and instrumental hiphop.

"Obviously you had people like DJ Shadow and DJ Krush who have been around for decades, but Lukid really had this new electronic analogue element that people like Flying Lotus on Brainfeeder got a lot of the credit for. I think he's released on a few labels, but you can also find him on Werkdiscs with Actress."

"I'm not as into him as I was a few years ago, but for a good year most of us in the band were just head over heels for this guy.

"As a DJ, his mixes are so eclectic. For me especially - someone who's into nostalgia like 90s hiphop, computer game sounds and 80s R&B hits - all these things sounded like someone playing between two radio stations. He made things that would sound entirely out of time yet completely in time - this kind of random noise, this mess or rhythm that you can't help but bop your head too."