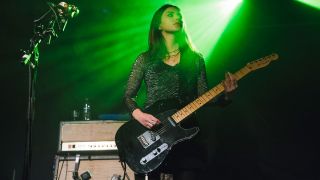 It’s been some time since we heard new material from Brighton two-piece Blood Red Shoes, but the drought ends in 2018, with the release of new single God Complex.

A brooding refrain of gritty overdrives and spaghetti western tremolo picking, the track is a very positive indicator indeed for Laura-Mary Carter and Steven Ansell’s forthcoming fifth album, due out later this year.

Before she returns to the UK for a select run of festivals, including 2000 Trees, Laura found time on the band’s US tour to dish the dirt on her early adventures in guitar playing, the effect she just can’t turn off and a near-death onstage experience...

“I got my first guitar in 2007 when the band was signed to V2 Records - before that, I just borrowed guitars from friends to teach myself and to play shows.

“Steve had a Telecaster that I used for the first three years of the band, so when I could finally afford a guitar I bought a Tele as I was used to playing one. We went to NYC for a show, and there I bought a cherry red American Tele, which I still have and play sometimes.”

“That’s a hard call, but I think it would be my Teisco trash guitar from the 1960s that I bought on eBay for €100. It has become part of our sound and the song An Animal from our last album was written on it as soon as I took it out of the box it came in. The sound is so distinctive I couldn’t replace it and find the same sound with any other guitar.”

“I think it would be my MXR Carbon Copy analogue delay. I just think it sounds so cool on everything!”

“No it has moved on, and that’s part of the story... Although EasyJet lost one of my favourite guitars a few years back and so I regret ever using that airline.”

“I find it exciting now to find trash guitars that have a unique sound. So I’d like to find something cool that has a history and has been sat in someone’s garage for 50 years.”

“I think when I saw The Black Keys at the O2 Arena in London. The guitar tone was so amazing for such a huge venue, too - it blew my mind!

“I also saw The War On Drugs in Pomona, CA the other night and that tone was pretty epic, too.”

“I’ve never had a lesson in my life... but maybe one from Poison Ivy [aka Kristy Marlana Wallace] from The Cramps ’cause she is just so badass!”

“I got electrocuted at a festival in Indonesia on stage, to the point where it physically pushed me back and sparks came out of the mic around my face. I could have died in Jakarta at age 27 and I still hadn’t even tried their coffee yet... It was okay in the end, though - they sent a 10-year-old to climb up the electricity pole to fix it!”