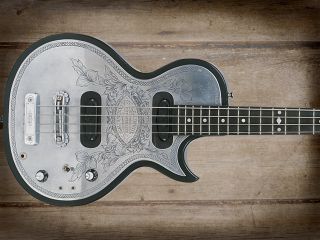 Metal guru, is it you?

By its very name the Zemaitis Custom Bass varies according to the wants of the purchaser, as do many of the guitars bearing his name.

Tony McPhee of the Groundhogs bought the first M/F (metal front) solid guitar as the metal plate proved extra shielding to reduce unwanted stage interference. When Ronnie Lane and Ronnie Wood of the Faces originally called into the Zemaitis workshop Tony had no idea who they were but they returned regularly and bought guitars and basses and helped to popularise the model.

Mostly the designs are based on the Les Paul shape, but tops are usually either like this highly patterned aluminium (a striking look achieved using a gun engraver) or featuring a multi-pearl mosaic.

Heavy in weight and heavy on the pocket, Zemaitis basses tend to make use of Seymour Duncan split coil and J-type units. Tony Zemaitis Jr continues the company since his father sadly passed away in 2002.

Our picture shows a fabulous 1992 Custom with original straight P-Bass style single coil pickups as commissioned by Bob Daisley, and our thanks go to him for allowing us to share this rare example.