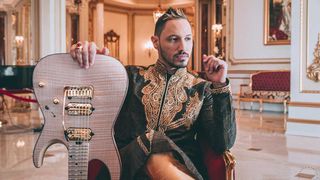 Anyone that said Vivaldi and Strauss couldn’t possibly be touring together in 2018 will soon be eating their words.

The difference of course being that the musicians on The Guitar Collective 2018 run are very much alive - Nita Strauss even having descended from Johan II himself amongst the other classical musicians that continued the family name, going as far as to recreate some of that same baroque majesty on her recent Controlled Chaos solo debut.

The other guitarist on the tour, Angel Vivaldi, doesn’t have any connections to his namesake and borrows more from the worlds of tech-metal and jazz-fusion than anything orchestral. That being said, he does reveal the pair did originally make plans to play up to the double-billing of composer greats…

“One of the things we wanted to do on this tour was a big Strauss and Vivaldi mash-up, but unfortunately because of schedules we couldn’t pull it off,” says the New Jersey native.

“Maybe in the future we’ll be able to make it happen! Unlike Nita, I’m not actually related to any composers... at least not that I’m aware of!”

If there’s one thing that works as Vivaldi’s forte, it’s versatility. Being a progressive artist has led to him absorbing influences from a wider net than most, as well as writing music that follows its own signature motif and narrative.

“I think the thing that sets me apart is I’m a very conceptual writer,” he explains. “All of my releases are concept records. And because of that I feel [versatility] is a big part of what I’m doing - I write pop ballads, rock songs, hard-rock songs, very heavy and fast tech-death songs. I guess I’m pretty diverse in terms of my discography, though whether it works to my detriment, I don’t know!”

Being more open-minded in his musical endeavours has also meant the guitarist can play with all kinds of other artists and their audiences, these experiences leading to him soaking in more flavours and spices.

“The advantage there is I’ve toured with completely different bands and learn from people of all walks of life and genres,” he reflects. “Generally I would say each style has its own blueprint as far as arrangement and how aggressive they play.

“Nita’s a great example: her record is very consistent and very heavy. I think a lot of people will be surprised by what she’s doing. I have something more for everyone; I guess that’s my approach, though it’s not really intentional.”

On the gear front, there’s plenty for Vivaldi to be excited about - the realisation of a dream to have a signature guitar. He’ll be joining the likes of Guthrie Govan, Joe Duplantier, Jake E. Lee, Warren DeMartini and Satchel in having his own Charvel model - which is high company indeed…

“We’re just about to announce my signature coming out at 2019 Winter NAMM, so I’m very excited,” he enthuses. “It has DiMarzio pickups, which we might be working on for something that comes out in the future.

“I use an Axe-Fx to run all my effects, but if I’m religious about one thing, it’s Mesa/Boogie amps! I just love them; currently, I’m running the JP-2C. It’s a pretty simple rig considering… the less things involved means less can go wrong. I prefer to keep it comfortable!”

Here the virtuoso gives his five tips to guitar greatness…

1. Start at the very foundation

“The foundation of my approach is legato. I look at it like this thick Redwood tree that has all these other different techniques branching out of it. The most important thing for any guitarist is putting together all the little pieces from your influences.

“For instance, I feel like I’m the lovechild of Kurt Cobain, Kirk Hammett, Alex Skolnick, Eric Johnson and Yngwie Malmsteen. You put that in a stew, stir it up and boom... I will come right out of it.

“If people gravitate towards what I do, it’s mainly in the fluidity of my legato. And tapping, which is essentially extended legato. My sweep-picking is half-picked and half-legato. There’s a certain type of smooth, silky bluesiness that comes from legato.

“In Spanish, el gato means cat. And cats are very graceful, very cunning animals. I think there’s a good parallel there! People might argue with this, but I feel like a better rhythm player than I am lead. I’ve spent a lot of time working on my rhythm chops, which are more alternate picking-based.”

2. Learn how to play rhythm guitar

“That’s the start of being able to write a good song. Here’s the thing: if you have a good idea of song structures and melodic tension, you can captivate people. But if you can’t write a riff or a song, you can play guitar until you are blue in the face and it will be for nothing. Honestly, the only way to capture the ear of an audience is with a good song.

“So I think it’s important to write pieces with beautiful harmonies and progressions but also remember to phrase in a way that’s elegant and does the song justice. In this day and age, everyone can play pretty well. The average guitarist doesn’t impress anymore; there are a million other players out there.

“If you can’t move someone emotionally and use your music to its maximum potential, all you are saying is, ‘Yeah, I can play fast and accurately!’ That doesn’t really move people anymore. Learn from the best songs and try to write from there. Learn why you love those songs and get that blueprint to start moving someone with your own ideas.”

“You hear the word phrasing a lot around guitar players. Everyone’s always like, ‘Check out this phrasing, it’s so good!’ but I feel like people sometimes don’t really have the same idea of what phrasing means. I break up guitar into three aspects: first is the intervals, so you can play three simple notes in different orders, like E/A/G, E/G/A, G/A/E, G/E/A, A/G/E, A/E/G.

“The second element is the rhythm; it’s the beat you play those notes. The final pillar is the phrasing; it’s the finesse behind the fingers, the type of vibrato, whether you slide into notes, what techniques you use, from the whammy bar to harmonics… all those little things that make each guitarist different.

“Trends come and go, but the great players remain instantly identifiable. With Malmsteen, you know it’s him straight away, same with Vai. That’s what phrasing means to me: the identity you create through those little touches.

“Again, a good song will help you find that identity. You might only need one note - that might be all you need to separate yourself from the million other guitarists out there trying to make it.”

“I was going to say look good doing it, but figured this is probably a better answer, haha! Work out what it is you want to say, establish realistic goals for yourself and be honest. If you want to be the fastest player in the world, God bless you… do it! If you want to be as melodic as Satriani, do it. It is possible.

“But do it in a way that works for you. Today’s players will be able to see everything on YouTube - you can see Plini doing his thing, me doing it my way. The knee-jerk reaction is to try everything, but when you try to grow 100 plants and give each one 1%, you might not necessarily grow anything.

“Instead, take three plants that really relate to you and take care of them at the very best of your abilities. Forget about the big greenhouse. Time passes quickly, so focus on the things that are most important for you. Don’t grow a load of sprouts when you could have had five trees. Play on your strengths.”

“This my last one, so I’m going to have to make it count! I might just go for a load of one-liners from what I’ve learned working in the music industry. Number one, the person you are influences how your art is perceived. Number two, be honest about strengths and weaknesses without judging. Number three, no bond is stronger than mutually hating the same person; never base a friendship on hate.

“Have a website and make sure it’s great. The industry is small and words travels fast, mind your speech. Get over the fact not everyone will like you or your art. Finally, artists and creatives can be fickle; learn to avoid conflict with integrity and passion.

“To summarise, there are three different investments to be successful in anything in life - especially in music - and that’s time, effort and money. With these, you can do anything, so invest into yourself. That’s what will make or break your career. Don’t follow anyone else’s formula, because each one is different for each artist.”

The Guitar Collective 2018 tour the USA starting on 19 November - head over to Angel Vivaldi's website for full dates.