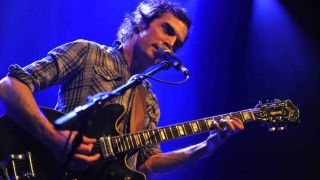 With new album Queen Of The Breakers, Montreal’s The Barr Brothers have honed their blend of folk, alternative and blues to produce a record that reaches the heady heights of My Morning Jacket, The Black Keys and other alternative luminaries.

Guitarist Brad Barr is at home with acoustic as he is electric, whether delivering swift fingerpicking (Song That I Heard) or searing pentatonic refrains (Kompromat), something audiences will witness when the band support The War On Drugs in the UK this week.

Just as Brad was printing his boarding pass for his flight over, we caught up with the frontman to hear the story of his first guitar, the priceless instruments he’d die for and why he wishes he’d bought fewer pedals…

“My first name-brand guitar was a Yamaha RGX series that my dad bought for me from a guy named Bob, who ran the Providence Music Company. It was pearlescent and had a locking tremolo system, allowing me to pull off the divebomb and ‘revving motorcycle’ techniques made popular by one of my heroes at the time, Mick Mars from Mötley Crüe. It was 1986, and I was 11. I recently found it in his attic and donated it to a music school in Providence.”

“I'd have to say its the More pedal, by Union Tube & Transistor out of Vancouver, BC. Its a clean boost, one knob, that makes any high-watt amp sound like a low-watt ’50s combo. It’s especially useful in shaping the tone of my acoustic, which I run through the amps.”

“Not really. I'm not much of a buyer/seller.”

“I guess I'm partial to 9ths, as they usually imply something carried over from the preceding harmony, acting almost like a drone.”

“Hmm... probably John McLaughlin. I'd like to know how he breaks down and reconstructs those Indian scales. He can play so many notes in such a short time, I feel he must have a method for subdividing those long melodies. My favourite work of his is on the Natural Elements record by Shakti, 1977.”

“A sleeping bag and a stove! I have a Mexican requinto, built by a wonderful player and luthier, Alfonso Paxtian from Tulum. His band is called Mogo Mogo. This instrument sounds particularly sweet coupled with the sound of the ocean.”

“Buy fewer pedals. Let the guitar and the tubes do most of the heavy tone lifting.”

Queen Of The Breakers is out now. The Barr Brothers tour the UK supporting The War On Drugs, beginning 9 November in Glasgow.