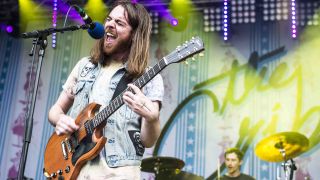 An integral part of Leeds' burgeoning alt-rock scene, Pulled Apart By Horses first made their name with lightning-paced riffs and uncompromisingly frenetic live performances, but their desire to defy expectations has pulled the band in myriad directions.

New album The Haze is a case in point, imbuing PABH's punk ethic with a power-pop sensibility, culminating in 12 tracks that are as infectious and finely honed as they are abrasive and noisy.

Before they head out on a headline UK tour in March, we caught up with frontman Tom Hudson to get the lowdown on his first experiments with guitar, essential effects and war stories from the PABH frontline…

“The very first guitar I ever had was a beaten-up nylon-string acoustic guitar. I tried to learn the basic chords on it but because I was so young - around 10 years old - my fingers used to really hurt as they we too small to properly hold stuff down on the fretboard!

“As soon as I had my first electric guitar everything changed! The guitar I had was a cheapo Kays guitar that cost about £30 and came with an amp. It was Sunburst and the scratchplate was so damaged and cracked that I had to get my dad to cut me a replacement one out of some perspex.

“The guitar went out of tune every time you strummed it, but that didn't matter... I had an electric guitar. I would just sit there in my room with the amp on overdrive - all regard for chords and scales were thrown out the window as I had found noise!

“I somehow started making weird songs with vocals and melodies before I could even play a proper song. I would record them all on a tape recorder and build a collection of ideas... all of it was really gross, though, haha! I had to get rid of the amp when it exploded a couple of years later and started smoking... It was like the guitar amp explosion scene from Back To The Future but on a micro scale!”

“If it was the rehearsal space it would have to be my trusty Gibson SG Special, 1960s reissue. That's my baby! I've snapped the neck off it, dented it all over, worn half of the body finish away from sweat and beer but it still keeps coming back and sounds better than ever! It's got P-90 pickups in it so it has that extra crunch that other pickups seem to lack.

“If I had to save something from my house, it would be my 1960s modified Fender Mustang bass. I have only had it for a couple of years but I love the thing - it's so easy to play!”

“A tuner pedal, haha! Other than that, it would have to be my Way Huge Green Rhino overdrive. It has a fuzzy crunch to it without being too over-the-top. I normally use it as an extra boost from my normal guitar tone, but we've done tours where I've had to use other people's amps and ended up using this for my main sound as it has loads of character and can kick some ass!

“I love my [Death By Audio] Fuzz War pedal, too, but that's more for messing around and creating dirty noise on top of everything else. Not essential.... but damn fun!”

“Luckily, I've managed to keep hold of most things I love, although I did lose a bass guitar somehow. It was one that I played in my old band so I had a bit of a sentimental attachment to it, but it wasn't the best guitar in the world so I moved on and learned to keep a better eye on things after that!

“I had a Z.Vex fuzz pedal when the band first started but I didn't know how to use it so I sold it. I kind of wish I still had that; you could get some gnarly sounds out of it, but I found it unruly to use live.”

“We practised last week; it was the first time in a while that we had all played in a room together. It always starts out a bit weird but after a couple of run-throughs things fall back into place.

“We played through loads of stuff from the new album - one was a new track called What’s Up Dude. I realised I had never played it and sung it at the same time (as I wrote the lyrics after we had written and recorded the track) so that was a bit of a challenge.”

“I would like to know some more scales to play around with when writing or playing solos. I'd also like to get into weirder tunings as that's something I've never really explored.”

“I think it would have to be Hendrix! The way he effortlessly jumped between scales and was constantly experimenting with sounds and creating new ideas as he played is amazing. Although I think it would probably be hard for him to teach as he plays his guitar as if it's a natural extension of his body!”

“Well, power would probably be an issue so it would have to be a really nice Martin acoustic or something. Also, if times get desperate, you always have that extra bit of firewood to keep you going on the cold desert nights!”

“Snapping the neck on my SG was pretty sobering. I didn't even throw it in a rock 'n' roll climax; I just placed it down on the monitors at the end of one of our sets and as I walked off I looked back to see it slip off and the neck crack off of it!

“For me, personally, I've done all sorts to my body onstage, and our lead guitarist James [Brown] has probably had it even worse! One of the worst was at Leeds festival a few years ago when I jumped off the stage and piled into the metal barrier at the front, putting a massive gash in my shin and blood everywhere. I've still got the scars as a souvenir!”

“I think I would just say to experiment with sounds more and listen to a whole array of music rather than just the obvious 'go-to' genres.”

The Haze is out on 17 March via Caroline International, and available to preorder now.