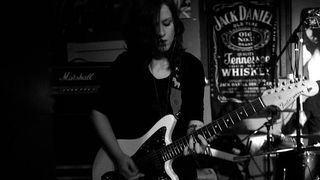 We love post-rock here at MR, but with the delay pedal-toting guitar-band floodgates fit to burst, whenever a group pipes up with a new twist on the well-worn genre, we take note - and Midas Fall had us scribbling extensively.

Yet any sense of overt sentimentality is offset by a Reznor-esque industrial edge courtesy of a battalion of drum machines, wisely putting distance between them and the rest of the instrumental-rock pack.

Ahead of the album’s release and accompanying tour, we caught up with reverb-keen six-stringer Burn to hear about her gear loves, onstage nightmares and of course, her cherished Jaguar, Sigourney…

“It was a Cherry Red Epiphone SG; I got it when I was 13 - in hindsight totally the wrong guitar to have bought, but I loved it at the time.”

“My Fender Jaguar, Sigourney. It's the only guitar I play and record with - hopelessly monogamous! I spent years adjusting it to be as close to (my idea of) perfection as possible: Mastery bridge, locking tuners, pot upgrades, fret dresses, custom nut, Seymour Duncan pickups (Quarter Pounder and Hot Rail), full rewire, shielding - everything has been changed/upgraded except the body and neck! I have others, but they're really only backups.”

“The Eventide Space, which I only bought last year, but had wanted for the longest time. It was a really important tool in creating the Evaporate album. I've used a lot of different reverb pedals, but nothing comes close to this.”

“I had an Orange RV50 head and matching 2x12 cab, which I traded for an old Silverface Fender Twin. It was a moment of madness: the Twin just couldn't create the sounds I wanted, so I got rid of it after about a month and got an Orange RV50 combo, though I still prefer the head and cab setup.”

“I'm actually really happy with my setup at the moment, but I've recently been considering a sustainer pickup, though I'm hesitant to give up the neck SD Quarter Pounder.”

“Hmm. Sure I should probably say some fruity jazz chord here, but in all honesty, a big, mournful D minor is my favourite. Stalking Moon, the closing track from our first album, is more or less D minor the whole way through and I always love playing it.”

“This is a tough one to answer because I don't think there really can be a greatest tone: how great the tone is comes down to how well-placed it is in context with other instruments. I've been listening to a lot of Emma Ruth Rundle recently; the guitar sounds on her albums are all absolutely stunning.”

“Probably [former Silverchair frontman] Daniel Johns; as a guitarist I think he's massively underrated. He uses a lot of interesting tunings, which is something I'd like to explore more myself.”

“Years ago, when we first started the band, we had a show in Bristol and it was awful. We were all so hideously drunk we could barely pull ourselves onstage.

“Partway through the set, I fell into the drum kit, messed up my guitar, hurt my arm and staggered around for far too long trying to compose myself and then I couldn't find my Ebow... The whole thing was a disaster. We no longer drink more than a couple before getting on stage!”

“Don't waste time learning how to tap and stay away from flange pedals. Instead, get a good reverb and focus on melodies.”

Evaporate is out on 27 April via Monotreme Records. Midas Fall tour the UK in May: