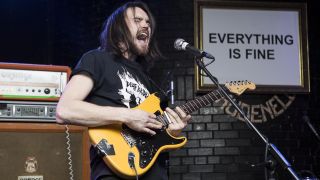 Heck (née Baby Godzilla) were one of the most notorious bands on the UK’s live circuit, their blistering brand of impossibly raucous hardcore matched only by their unpredictable onstage (and just as likely in-crowd) antics - but as that band met its end, Haggard Cat rises from the ashes.

As the band prepare to unleash new album Challenger on 20 April via the legendary Earache Records label, we caught up with Matt to hear why he can never have too many Strats and what he’d dub the worst of his many, many onstage nightmares…

“I did have a crummy nylon-strung thing when I was like eight or nine that came with a VHS tape that attempted to teach you Oasis songs and Scarborough Fair - I broke a string and then gave up for a few years.

“But then my mate at school got an electric guitar when I was around 12 and I absolutely had to have one; I ended up getting a really nice-coloured Cobalt Blue Squier Strat and that's when things really got out of hand. Over the years, I covered it in stickers, ripped them off again, sanded of all the lacquer by hand and ultimately smashed the poor thing up; I really wish I still had it.”

“Oh God, this is a totally unfair question... You won't show the others, will you? Out of pure sentimental value (and a ton of love) I'd go with the Strat I received for my 18th birthday.

“I'll never let it go: definitely the nicest guitar I've ever played, we've grown up together and I occasionally play it live. Recently I found myself throwing it across a stage and had a sudden snap realisation of ‘what am I fucking doing?’ and it has since been apologised to and stuck in my bedroom for a bit while I think about what I did.

“A close second would be my current stage guitar, which is a rather dashing 1990s Gibson Explorer (named Dora) - I bought her fairly recently and she has basically changed my entire personality; I think Explorers just do that to people.”

“That one's a little easier. I would go with my noise-making machine; an early ’90s green Russian Big Muff with the tall font. You basically just stomp it on and it creates an unintelligible racket that I absolutely love. Currently, however, I'm having to live without it whilst I have the switch fixed from too much stomping.”

“I had to say goodbye to a load of gear that I had growing up when I fell on hard times in my early 20s and needed money to keep paying rent. In amongst this stuff was an absolutely ridiculously ostentatious Minarik Inferno; I'd probably never play it, but it's something I wish I still had to look at and laugh at.”

“Well, you can never have TOO many Strats in my opinion, and I currently have my eye on the new(ish) American Professional series. There's one in white with a white scratchplate and maple neck that's very almost white as well - I'm into it. It comes loaded with the new noiseless single coils and has a neck profile based on the models from the ’60s and a very similar feel. Gimme gimme gimme.”

“Probably David Gilmour's second guitar solo in Comfortably Numb. It gets me every time, just really makes the hairs stand up on the back of your neck. Plus, I'm pretty sure it's a Strat through a Big Muff... go figure.”

“It's a bit of a weird one from me, but I'd probably go with Nick Drake. He always created such interesting tunings and rhythms that always sounded fairly simplistic and understated to the ear but are completely mind-boggling when you try to play them.

“His technique is completely different to mine and it's something I would love to have more insight into, especially with my acoustic playing. It was almost like he was composing for piano but then transposing it exactly by the letter for guitar. I'm pretty sure he was a witch.”

“Our stage performances have always been far from straightforward. And I'm pretty sure anything that possibly could ever have gone wrong has, at one point or another, gone wrong. I've broken bones and teeth, had black eyes and deep gouges to my head/other bits, broken absolutely EVERY bit of gear (all at the same time the first time I ever played Leeds festival which was a particular nightmare) and been on the giving and receiving end of onstage arguments.

“The one that probably stands out is when I leapt off of 2000 Trees mainstage and broke my foot in three places. I carried on playing, ran into the crowd and crowdsurfed back, got off stage and just knew something wasn't right. I stayed at the festival for the rest of the weekend walking about on it (even had it stood on by a friend - they know who they are) and didn't find out it was broken until the following Monday when I finally got to go to a hospital.”

“This is a totally uncool thing to say, but PRACTISE MORE! I've always played guitar religiously since picking up an electric all those years ago, but one thing I never really grasped was structured practice. I'd probably have much better chops and less sloppy bad habits if I had mastered that when I was starting out; but then again I guess that's partly what gives your playing its own personality.”