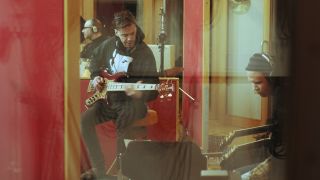 Forming in the mid-'90s, Toronto's Do Make Say Think can be considered among the founding fathers of post-rock.

After an eight-year break between albums, the five-piece now release Stubborn Persistent Illusions, their seventh LP and one that easily ranks among their finest work.

Expertly employing the seismic dynamic shifts between gentle currents and crashing waves with which they made their name, SPI shows many of the bands that arrived in Do Make Say Think's wake exactly how it's done.

Ahead of the album's release, we posed the big questions to guitar, bass and keyboard player Justin Small, who let us in on his five-string philosophy and why he should listen to his wrist more often…

“My first was a black Les Paul knock-off by Mann. It came with a small Traynor 15-watt amp. Those little (Canadian) Traynor amps distort pretty easily. I'll never forget the sound of that first big E! I was 12 years old and it was a gift from my folks. We were in between homes at the time and living with my grandparents. I think it was a gift born of guilt. Immediately followed by regret!”

“Hmm... seems silly, but my 'Blond'. It's a Joe Pass Epiphone from the early 90's. Cheaply made and constantly in need of a tune-up. But I've hot-rodded it over the years with vintage pickups and a Bigsby, and five classic Gibson machineheads. I only play five strings (the high E is removed). I do this because 'I never want the chord to be final'... ahem.. stupid post-rock romanticism.”

“EarthQuaker Devices' Disaster Transport! A dual delay/reverb/mindfuck. And I'm currently living without it as I left it plugged in during a thunderstorm power surge and it's totally fried. Thanks for reminding me.”

“I had two Rickenbacker basses. One Blond '73 and one Black '76. I had quit my day job to persue film scoring with Ohad from the band. We had been doing this for about four years, but having a newborn and working two jobs wasn't working for me. I had some heavy conversations with my wife and decided to leave the paycheque behind and do score work fulltime. There were a couple of lean months and, well, '76 Black Betty had to go. I often miss her. Especially when I see images of me playing it live.”

“I play every day. But for a reason. Ohad and I compose for film, and we are currently busy, so I play every day. But it's for a different end. I need to have something recorded to move on with a project I'm involved with. So I am constantly playing. It's not practising though. Which is something I should force myself to do. In fact, I have the word 'practice' tattooed on my wrist. I don't listen to my wrist.”

“A water cooler. Filled with water.”

“Shame. Never feel shame on stage. Gear fails. Band members are cranky and fuck up. Audiences can sometimes suck. Shame is the worst thing that can happen to you. So don't let it happen.”

Stubborn Persistent Illusions is out on 19 May via Constellation.