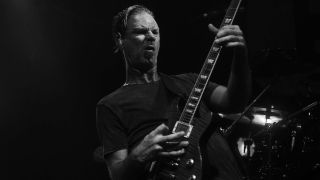 Cog’s electrifying blend of prog, metal and hard-rock enshrined the power trio as one of Australia’s most influential alternative bands, and in 2019, they’re heading back to the UK for their first shows in 11 years with fellow countrymen Sleepmakeswaves.

The group are also hard at work on the follow-up to 2008’s Sharing Space, after dropping a succession of new singles, including last month’s Drawn Together, ahead of the tour, with a full album on the horizon.

While frontman/guitarist Flynn Gower packs his suitcase, we quizzed him on the big topics: first guitars, early influences and what really makes a great guitar tone...

“My first guitar was an old steel-string acoustic I bought from one of my brother’s friends for $30. It was terrible but I loved it. Its value definitely increased after a Mr Sheen session.”

2. The building’s burning down - which one guitar do you save?

“Delay, for sure. I’ve been using it for so long it’s pretty integral now. I think that almost immediately it became a metronome of sorts, and if I played with delay I could use it to check my timing as I went along.”

“Not really. Once I acquire something, I rarely end up selling it.”

“I’d love to get an Eventide H9 with all the goodies.”

“I don’t know the name of it. It’s like a Spanish-sounding minor 7th or something.”

“Hmmm. Tough one. John Mayer does a version of Bill Withers’ Ain’t No Sunshine at the Crossroads festival which is pretty sweet indeed. I can’t help but feel that the blues and jazz players have had the best guitar tones. Once things started distorting, it led to some great sounds and moods, but in terms of a stunning tone it’s hard to compete with the old-school.”

“Maybe Mark Knopfler. Or JJ Cale. I love both of these players. Mark was there since early childhood. Mum and Dad used to play the first Dire Straits album all the time. I still pop it on quite regularly. JJ came later on. He’s so relaxed and just super-tasty guitar playing. Dad would play JJ over and over and over again in his later life.”

“Just gear failures, et cetera. Super-frustrating! I lost my voice on the reunion tour we did a couple of years ago and that was initially a terrifying scenario, but as is often the case in life it turned out to be a blessing in disguise as the crowd sang all the songs for me!”

“Keep going and strive to express your uniqueness. Never try to be a good version of someone else.”

Cog and Sleepmakeswaves play the UK in March: