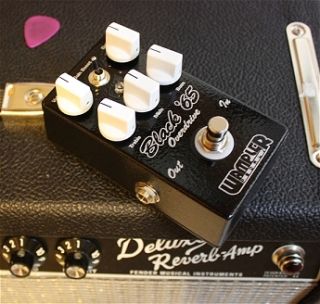 Brian Wampler has been in business since the early noughties, creating an impressive range of guitar effect pedals that are revered by countless big name players including Brent Mason and Johnny Hiland. The Black '65 Overdrive continues that success…

While there's a lot of interest in high gain pedals that are designed to make your guitar scream, the demand for overdrive based tones is growing considerably. The type of tone that can go from very light crunch (dig in with your pick and your tone gets a little hairy) through to a smooth and articulate drive well. The ballpark area for this tone has been spurred on by the iconic Tube Screamer pedal that found favour with many guitarists in the 80s, including SRV.

While not Tube Screamer sounding, the Wampler Black '65 Overdrive offers a little of that overdrive type tone. Based on a cranked Fender amp, this pedal has various tone options made available from five dials (gain, volume and treble/mid/bass eq) and one switch (gain boost). As a side observation, most Wampler pedals offer more controls than those from other companies making for broader tone options - nice! Reportedly nine months in the making, the pedal developed from various A/B tests with Fender amps and gain settings. As Brian says "I've heard guys say they hear Twin, some say Vibrolux, some say Deluxe Reverb. Regardless, it still has that "Blackface" type of sound. When you turn it up, it's going to break up more like the amp would if you turn it up. The boost switch is basically adding a booster in front of this circuit to give it more gain."

In use, it has a broader range of tones than you may expect. From a shimmery single coil mild bite to a thick classic rock humbucker drive, it's perfect for all manner of genres from Brent Mason country through to drives you'd expect from ZZ Top or AC/DC. Certainly when you wind up the gain, note attack is a little soft with an appealing bloom afterwards (don't expect note tracking to be quite as fast as, say, a Boogie Rectifier). Certainly, if you hanker for early Clapton and Hendrix tones, maybe even more modern Eric Johnston style crunch, you'll appreciate this organic sounding pedal as much as we do. Priced at $199, the Black '65 Overdrive does the valve amp tone very, very well.