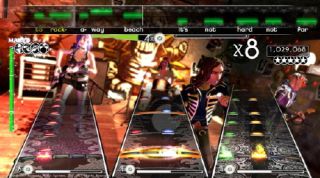 Can a videogame improve your guitar playing? Rock Band 3 creators Harmonix - the team that created the first two Guitar Hero games - seem to be going that way.

The company announced details of Rock Band 3 today including new guitar controllers for the game's Pro mode. They are again based on a Fender Strat, while third party company Mad Catz have one based on the design of a Fender Mustang. Both will have six strings you can strum.

In the game - which also features a mic, drum and keyboard controllers - Pro mode's guitar notations will be closer to real music, and the guitar controllers are said to react much closer to the real thing than ever before. Closer to learning how to play a real guitar? Time will tell.

Rock Band 3 will be released this Autumn.

Here's USA Today's first look at the game in action: