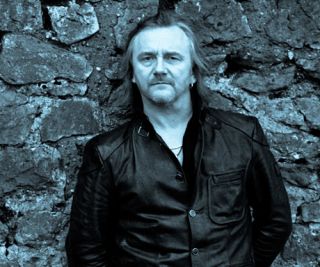 In this new interview, the guitarist tells us about the performance that changed his career

On Saturday 18 August 1990, a young English quintet took the stage to open Monsters of Rock shindig at Donington. That band was Thunder and here, in an exclusive interview, guitarist Luke Morley tells us what he remembers about that day and the performance that broke the band wide open.

"Well, I remember walking to the stage and being very nervous - in fact the last time I was nervous going on stage was that day as I'd never played in front of an audience like that before, something like 80,000. At that point Thunder had only been going for a year and we'd played in all sorts of places - never stopped working - and we weren't really aware of how popular we'd become.

"So we walked out on stage not really knowing what to expect and the only bit of the gig I remember was starting the riff to She's So Fine, looking up and seeing all the hands in the air and thinking Well, this'll be fine, nothing to worry about.

"The following 45 minutes were an absolute blur and then I was back in the dressing room with a beer in my hand! We all looked at each other and went That went quite well!

"I mean there was so much adrenaline flying around that when you listen back to it, or watch the video, it's quite funny because you can see it. We were all wound up looking forward to it and determined to do our best. Some of it's quite all a bit quite manic and then starts to settle down.

"But yeah, it was a wonderful thing and a beautiful day, and some of it was due to the previous year's festival having been cancelled and that we were the first band of the day so it was important that it got off the right way.

"I think everybody, all the bands and the audience as well, wanted it to go well and so there was a nice vibe in the air. Y'know, sometimes you're doing the right thing at the right time and it was one of those days where everything went well."

To read more of this interview, look out for out Fretbuzz with Luke in issue 334 of Guitarist.