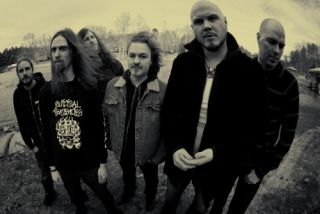 Soilwork are back and have never sounded better. July 2 sees the release of their seventh album, The Panic Broadcast, and it's a definitive statement from the forward-thinking Swedish metallers. It's the first album since the welcome return of guitarist and founder member Peter Wichers and the debut of fellow axeman Sylvain Coudret.

With them comes the return of the kind of stunning solo passages that set the band apart on 2002's Natural Born Chaos. Think juggernaut riffs and the lead worlds of neoclassical finesse and Dimebagian blues colliding in perfect harmony.

Combine that with the contagious melodies of versatile vocalist Bjorn 'Speed' Strid that have as much in common with Abba as At The Gates and you have the sound of a band absolutely reveling in their strengths.

It's the best metal album we've heard this year so far and in a two-part Guitarist.co.uk exclusive, we talk to Peter about his role as producer, player and writer on The Panic Broadcast…

Last time Guitarist met up with you Peter, it was in the middle of your first European tour since rejoining Soilwork. after some time with Caparison guitars you were trying out some Ibanez Horizons, an original and Page Hamilton signature model, what did you settle on for the album?

"We used Horizons for all the rhythm and lead guitars on this album, we did a couple of songs with a baritone. For some of the songs it just worked better. But mainly it's the Horizon with EMG 85 and 81 pickups. Besides that we used Takamine acoustic guitars but that was for just one part of the record."

The rhythm sound is huge on this album - it's fat and heavy but has clarity too. You've obviously picked up considerable experience producing bands in your time away, did it take long to dial in the sound?

"That's really my comfort zone, dialing in guitar tones. For me it didn't really take that long. Since we quad-tracked on this album, which we haven't done in a long time, it was important we didn't get too much gain when we were tracking because there's a tendency to make it too muddy.

"I guess the trick for us was to use the Maxon overdrive pedal and then I ran both an Engl Special Edition - who I'm now endorsed by - and then I used my old [Peavey] 5150 which has been with me for 13 years now. I brought it over to the US when I moved here five years ago and I had it recapped [replaced the capacitors]. I think it sounds great, whenever I'm in doubt I can still count on the 5150."

Was that 5150 the main amp on the Natural Born Chaos album?

"Actually, on Natural Born Chaos I think we used only an Engl Savage 120."

What effects did you use on this album?

"I have a Maxon endorsement, so we went crazy with some phasers and chorus, but nothing too nuts. Sven [Karlsson] takes care of a lot of that on keyboards. A lot of times we wrote something on guitar but it became too much, there was so much guitar already. So we basically divided some of it and said Why don't we re-do it to have more of a keyboard element? Playing [certain parts] on keboard instead.

"We wanted to bring that keyboard element back to Soilwork on this album, which I don't really think has been that present since Natural Born Chaos. Everybody gets their place [to shine] on this record."

This is your first Soilwork album with Sylvain, what is the dynamic like between you?

"This guy is so good. Leads are something that are really personal and I try to let him do his own thing. I didn't really have to say anything to the guy because he's really that good. It's so nice to have that kind of element where someone just gets it immediately. And I'm not saying we haven't been able to get that in the past, but there really is no limitations to what that guy can play.

"He smokes everything we've ever done before when it comes to leads, but it's still done with great phrasing. He can do the whole Yngwie Malmsteen thing for a minute and a half, but who the hell wants to listen to that for that long? Don't get me wrong, I like Yngwie but after 15 minutes at the show you're like, Can we move on or do something else?

"So I think for Sylvain, he mixes his styles well. I can't say enough good things about the guy - great guy and a great guitar player. I've been a fan of his playing ever since he was in Scarve."

One of the signatures of your own playing in Soilwork has been the blues element. It seems to be rare in metal these days and it again comes through in the groove of some of the riffs on this record but you'll also throw in blues licks too…

"You mean the blatant Pantera/Dimebag rip-off? [laughs] He's the guy that really made me want to do this. When it comes to songwriting, I listen to a lot of Deep Purple and a lot of the older stuff such as Thin Lizzy and I think that rubbed off, because we wanted to create that blues element [in the band].

"A lot of death metal fans maybe don't appreciate it and I can't say it's completely original, but it's something that I think is kind of cool to blend into the kind of extreme metal style that we do because, as you said, it's not really that common."

What's the experience like for you performing three roles for the band - writer, player and producer? Is there a lot of pressure?

"I try not to think about it too much. If I feel like I'm too pressured, the stress will get the better of me. First and foremost, the songs needed to be there first and they were there before we actually went into the studio. We left a couple of things until we were there - leads and stuff that we improvised.

"But as far as songwriting, we do a lot of the preproduction before we go into the studio so we can focus on performance. So when everyone came into the studio I knew the arrangements were there so I could focus on making everybody play to the top of their ability."

Is that how the writing process has worked in the past?

"Yes and no. We didn't do a lot of preproduction on some of the other records. On Natural Born Chaos we did a lot of pre-production and I think on that album it shows. We were experimenting a lot on what direction we wanted to go and we were sick of being compared with a lot of bands. We wanted to do something different and that kind of set the bar for Soilwork's sound. At least I'd like to think it did.

"I think that we tried to do the same for this one. We really tried not to worry about what how everything would be perceived - in the past we thought, maybe this particular song will work live, for example. Since so many people download songs these days, in order to have people buy the whole record you need to have variety. The songs need to sound different.

"You can't listen to one song on this record and say this is how the new record sounds. Every song has a different style so I think that's what we really focussed on for this record and I can't say I've ever been so proud of any record I've done. That's how confident I am with this record."

"It's funny you should say that because I didn't really think about it before we went into the studio and while we were tracking I thought, God damn there are a lot of guitar solos on this record! But that's cool - I don't think that was our intention but it was just a spontaneous thing where we thought, Let's do it. It's fun for us to play it.

"We were just so done with [long guitar solos] at one point where it just felt like so many people were starting to do it and it just got boring. Some people didn't put any effort into it. For us it's very important as to what's behind the lead - I don't know if a lot of people listen to that but there's a lot of bands will play basic chords and someone plays a lead over it.

"In Soilwork we try and play a unique part for the lead where the lead goes on top of that. We don't just say, Let's just put a lead in here because this song calls for it. We actually try and tailor it and that was the big challenge for us on this record. That's something we had in the past that I don't think Soilwork has had on the previous two or three records."

Look out for part two of our conversation with Peter on the Guitarist blog soon where we talk more about his key role and the standout moments from The Panic Broadcast.