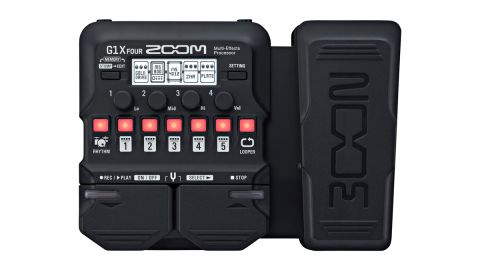 With its latest effort, Zoom has ensured it's still the first name in multi-effects pedals for beginners.

The Zoom 505 was probably the first digital effects pedal that many guitarists of a certain generation had seen.

Although none of the individual sounds were that impressive, the creative potential of having so many unusual effects in a bargain unit couldn’t be overstated. The G1X is the latest in that historic lineage, offering a smorgasbord of far more impressive effects, drives and even amp sims in a rugged yet affordable enclosure.

It’s more intuitive than a lot of budget multi-effects. With no peeking at the manual, you can quickly suss out how to build a patch out of multiple blocks in a chain. The sounds are solid on the whole, with a good spread of basic reverbs and delays. The tape echo setting is particularly pleasant, although the reverse delay isn’t up to much.

Many effects also have a variant that can be assigned to the treadle control, meaning you can swell in reverbs, set it to a pretty decent uni-vibe effect for some Hendrix riffs, or keep it as a simple volume control. There’s also a whammy effect, which, although it doesn’t track especially well, does a decent enough job. As perhaps is to be expected, the drives aren’t anything to write home about, but with some careful EQ-ing at the amp, you can get some serviceable tones.

While it’s not going to challenge Boss or Strymon, this is a capable little unit. The biggest drawback is simply that, with two footswitches and up to five effects per patch, the G1X isn’t particularly well-suited to live use. However, as a first multi-effects pedal, it’s a winner.