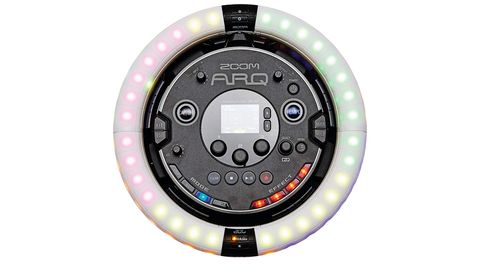 ARQ is fun and capable of good results. But before you get dazzled by its lights, consider if it’s the perfect fit for you, as it isn’t cheap.

Zoom’s name isn’t necessarily one you’d immediately associate with production tools aimed equally at the stage and the studio but, in the unusual and brightly-coloured ARQ, the target market is an even split between musicians working in both arenas.

The ARQ Aero RhythmTrak AR-96 is a combination of a step sequencer, sample-laden drum programmer, sampler, looper, song sequencer and performance instrument. However, its standout feature and USP is its design.

ARQ comes in two parts, with a base unit providing access to modes and key parameters, while a detachable, multicoloured white ring sits on top, ready to be uncoupled from the base unit (or cradled on top of it), providing the interface by which notes can be triggered and programmed, or real-time effects manipulated. It’s bold, it’s bright... but is it beautiful?

Firstly, let’s find out what’s onboard the ARQ. There are 468 drum and instrument samples stored in memory, as well as 70 synth samples, which you can add to, either capturing audio directly via the stereo input on the side of the base unit, or by plugging in an SD card, from which samples can be read and imported. You can save and export sequences and loops via this card port too.

Output is provided via a pair of 1/4-inch jack sockets, while there’s also a headphone output on the other side of the base unit. Connectivity extends to a mini-USB socket, which provides both buss power and MIDI interfacing, while the power port does exactly what you’d expect. The detachable ring communicates with the base station over Bluetooth (hence Zoom referring to it as its “wireless Bluetooth Ring Controller”) and while it can be laid on top of the base unit at any angle, there is a magnetic pin connector at the top (where the Zoom logo is) to provide a firmer connection when you want to dock it.

And so to the Wireless Ring Controller itself. The design of this divides the white sections up into a grid of 96 pads, each of which represents an individual, velocity and pressure-sensitive interface of its own. The Ring Controller can be used to program and trigger samples, patterns and more on the fly, with a correspondingly-coloured light illuminating to reflect the action you’re taking. When you’re playing back or recording a sequence a separate light runs round the ring to show you the current position of the pattern.

If you’re working with a pitched instrument, the Ring Controller effectively becomes a tunable, chromatic keyboard with pitches triggered sequentially as you move around, while drums can be mapped in whole kits, or on a per-sample basis. Neatly, the battery in the Ring Controller charges whenever it’s placed on the Base unit.

ARQ offers a dedicated Effects section with Filter, Delay, Reverb and Master FX options. Pressing on one of these allows you to manipulate key parameters from the base unit, with the rotary dials below the interface controlling these. The Master FX section offers several effects types, including Limiter, Distortion, Bitcrushing and Reverse Delays.

However, it’s much more fun to manipulate effects by lifting the Ring Controller out of its cradle and using its built-in Accelerometer to control these instead; as you tilt the Ring Controller, you’ll hear parameters being modified, letting you introduce Delays, increase Reverb Decay length or add Filters to sequences and patterns as they play back.

The Ring Controller provides access to these four Effects areas via dedicated buttons, so you can engage one or more here directly, allowing you to create ongoing, evolving effects treatments, or short-term triggers which you easily switch in and out.

To work with ARQ, first you need to select a Mode. Four are available: Step, Instrument, Song and Looper. In Step Mode, the best place to start is to load one of the preset patterns, which you can audition in real time as a sequence plays back. You then swap out individual kit pieces, replacing any sound you don’t like for another, though this isn’t quite as intuitive as it might be.

Zoom has done a good job of providing multiple tutorials on its website to show this in action but getting at and swapping kit pieces requires a pretty comprehensive collection of functions, dial-tweaks and button presses, which is more confusing than it might be. In practice, it takes a while before this process is second nature.

In fairness, though, that’s because there are so many options and functions onboard that a degree of menu surfing was always likely to be necessary on a compact instrument like ARQ. And there’s no doubt that building patterns is fun once you add individual hits via the Ring Controller, while the Capture mode is great, providing one-button access to sampling. The Looper is powerful too, capturing your sequence ‘as one’ before you can manipulate its pitch (among other parameters) on the fly.

Another word of caution: Zoom has built a ‘grip detection’ mode, so that if you pick the ring up to build patterns away from the base unit, you shouldn’t inadvertently trigger sounds by holding the Ring in your hand. This wasn’t always successful - we found that a note cluster was produced until we learned how hard, and where exactly, to hold the Ring.

If you’re interested in pattern sequencing and want a hardware controller for this, rather than workstation software, there’s no doubt that ARQ is a capable concept and any company which looks to develop and design something this unique should be respected. That said, you’ll have to think very carefully about whether this is how you want to spend £500 for the capability offered.

Fundamentally, ARQ offers two bars of pattern sequencing before patterns can be loaded into songs and, while there are digital effects and real-time manipulation capabilities aplenty onboard, for the same money you can more-or-less buy Ableton Live (or its Push controller) or any one of the other leading DAW software packages, many of which are now more ‘live-oriented’ than their original sequencing roots.

Of course, this comparison is unfair, as ARQ’s remit is different, but if you ‘only’ have £500 to spend, think very carefully.