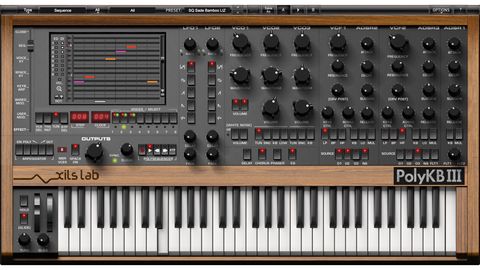 A modelled emulation of the exquisitely rare RSF PolyKobol 2 analogue synthesiser, PolyKB hasn’t seen a full-length appraisal in since version 1, way back in 2010, so here we’re reviewing the latest version of it as a whole, rather than just looking at what’s new.

For owners of v2.5, which was a free upgrade from v1 (introducing a new GUI, high- and band-pass filter modes, the ability to use the sequencer as a modulation source and more), the €39 upgrade fee gets you a third extra oscillator and second filter (the latter bringing with it dual filter input selection and output mixing, plus an accompanying envelope), a second 2x4 User modulation matrix, and separate time multipliers for each envelope.

So, PolyKB III is a three-oscillator, dual filter analogue-style polysynth with a matrix-driven modulation system, a built-in polyphonic sequencer, a handful of effects, and an interface that’s more intuitive than it looks. The design of the oscillators is one of its defining features, as their waveforms are continuously morphable from triangle through saw, then double saw, to a square wave that progressively narrows down to a thin pulse. The knob that controls this morphing can, of course, be modulated for all sorts of shifting timbres.

PolyKB III’s two X/Y pads enable detailed 2D positioning and modulation triggering of and by each polyphonic voice, which can be set in number from 1 to 16.

Space XY has you dragging dots in front of two virtual cardioid microphones to alter their left/right stereo panning and forward/back proximity. Three fixed and two random presets get you started, and two Dynamic animation options (Aquarium and Magnet - hopefully many more are in the pipeline) move the points around the pad in a prescribed pattern by a variable amount, at a rate set by the Speed knob. The angle of the mics and distance between them are adjustable, as is the Width of the stereo field.

Voice XY lets you load a modulation target (with bipolar Amount control) onto each corner of the XY pad and freely position the voices between them for a different blend of modulation as each voice plays. It’s endlessly creative and entertaining, although the lack of voice position modulation is seriously disappointing. It would be helpful if the voice dots were numbered in both XY pads, so that you could tell which one you’re moving at any given point - at the moment, you’re basically guessing or cycling through voices until the one you want lights up.

Oscillators 2 and 3 each also feature hard sync and detune against Oscillator 1, and can be set loose from keyboard control to become LFOs - Oscillator 2 has a Low button for slowing it down to an appropriate speed range for this, but for some reason Osc 3 doesn’t. Up to 16 voices of polyphony are on offer, including up to six Unison voices, randomly detuned with the Drift knob in the Keyboard/Arpeggiator panel.

The two zero-delay feedback filters are identical 24dB/octave models with low-, high- and band-pass modes, and overdrive circuits that can be placed pre or post. The input into each filter is determined by the Source buttons below it, of which there’s one for each VCO and the noise generator, and an additional one for routing Filter 1 into Filter 2; and the outputs of both filters are mixed using a dedicated knob. It all adds up to a highly flexible filtering setup, capable of both parallel and serial flow, or a combination of both.

PolyKB III’s modulation architecture is negotiated over three assignment screens: Wired Mod, User Mod and Voice XY. Providing the signals are three envelopes, two LFOs, the Step Sequencer (secondary to its note playback functionality - see below), and the usual MIDI messages: Velocity, Aftertouch, Keytracking and Mod Wheel. The envelopes are hardwired to the amp and filters (but also available for other things, naturally), and Envs 2 and 3 are loopable. All three can be multiplied by factors of 2, 3 or 4, too, for super-slow ramping.

The LFOs each output the sum of up to five waveforms - sine or triangle, square, ramp up, ramp down and sample+hold - activated by the buttons next to each one. They can also be ‘lagged’ and faded in.

Switching between the modulation assignment panels (as well as the Effect, Step Sequencer, Space XY and Keyboard/Arp editors) is done with the fader at the far left. The Wired Mod screen is a button matrix in which five modulators (LFO1, LFO2 or Noise, ADSR2, VCO2 and Velocity) are assignable in parallel to any number of targets from a fixed list (oscillator pitches and waveforms, filter cutoffs, global envelope Attack and Decay, and the amp).

Click an assignment button once for negative modulation and twice for positive, and activate the Wheel button for mod wheel depth control. The User Mod screen uses the same button matrix concept to assign two pairs (upgraded from one pair in v2.5) of user-selected Sources to up to four user-selectable Destinations each.

The button-driven assignments make the Wired and User modulations easy and fun to mess around with, but with the depths of all assignments for each source governed by a single Amount knob, frustration frequently arises - this is a complaint levelled at PolyKB since day one, but we guess XILS-lab aren’t planning to address it. The remaining modulation screen, Voice XY, is discussed in X and Y.

For internal note generation, PolyKB III includes an arpeggiator and a step sequencer. The arp features editable chord sequencing and a polyphonic mode, and defaults to Random mode when no other direction is chosen.

The polyphonic 128-step Sequencer can play back and edit up to eight voices at once, with notes and velocities recorded or drawn into a relentlessly fiddly but effective piano roll-style interface. Sequences are saveable as presets, and as of v2.5, the Sequencer’s pitch and velocity output can be pressed into service as modulation sources, too.

Finally, the Effects page houses Delay, Phaser, Chorus and two-band shelving EQ modules, all offering enough control to get the job done and sounding quite delicious.

PolyKB III is a genuine one-of-a-kind synth that moves and sounds quite unlike any other. The wave morphing is clearly a killer feature, and the modulation matrices, step sequencer and XY editors all play their parts in defining the character and feel of this unique instrument; but it’s the sheer quality of the oscillators and filters that keep us coming back for more. They sound dazzlingly ‘real’, oozing analogue liquidity and vibe, whether singing or screaming.

There’s really nothing PolyKB can’t turn its hand to, from thumping basses, writhing leads and delicate bells to elaborate polyphonic sequences, dense arps, textures, soundscapes and anything else where motion and dynamics are key. And despite the age of the hardware being modelled, PolyKB III has a surprisingly modern sound, presumably thanks to the many modifications made by XILS to the original blueprint. This is a synth that any electronic producer absolutely has to try, and a no-brainer upgrade for existing users.