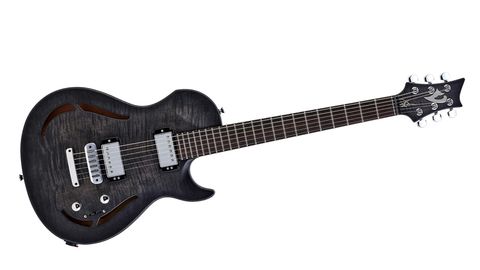 A fine example of the highest principles of guitar making.

If you want vintage clones, don’t look to Vigier. 10 years on, at the start of this year, Vigier took the wraps off the G.V. Hollow with its heavily chambered alder body, a pair of distinctive soundholes and a flamed maple cap.

Solid or semi-hollow, the G.V. design pushes the electric guitar forwards. Like all other Vigier models, it uses a carbon- reinforced maple truss-rod-less neck design, the 10/90 System, which bolts to the body, and includes numerous other Vigier flourishes from the six-piece zero fret to one of the most elegant takes on the time-honoured tune-o-matic bridge and stud tailpiece.

Yet irrespective of its finer details, the G.V. Hollow looks like a far less modern and more classic guitar than we’d usually expect from Vigier and that, according to Patrice, is the point.

“I am always anxious that a guitarist will put Vigier into a certain category. It’s a ‘shred guitar’ because we have fantastic, amazing guitarists that play fast using our instruments. But Vigier is not that: Vigier is music. We have players like Lapiro de Mbanga who was a big star in Cameroon - he told me, ‘I love the Vigier because it is the only guitar that resists the African humidity’ - or Stanley Jordan who is a master in jazz. So I wanted to show that we don’t only make shred guitars. That’s why I wanted to do a semi-hollow, not a jazz guitar but more in that spirit.”

It certainly has a lovely light weight (2.9kg/6.38lb) with a maximum body depth of 49mm thinning to approximately 38mm at the rim. Removing the small rear cavity cover you can clearly see the centre block, cut from the two-piece alder back, which stops just after the tailpiece. You can also see that the flamed maple top is carved both outside and inside, and lightly tapping on the top - and indeed back - you can hear an almost acoustic-like resonance.

There’s a considered, quite classic arching to most of the top carve with the exception of the bass-side shoulder, which has a subtle concave dishing. And while some colours have a natural edge, the Ebony Fade here - a dark grey/black colour - covers the entire guitar, just allowing the flame of the maple to subtly shine through. Most colours are available in gloss or matt, as here, which comes across as a very thin, almost just-stained finish. “We tint [stain] the wood then we apply a clear coat and then we would do the sunburst. The matt coat is on top: instead of sanding and polishing like a gloss, we just apply a final matt coat,” Patrice explains.

You can see the central carbon spine - like a skunk stripe - on the back of the neck surrounded either side by more lightly flamed maple. The dark, deep brown fingerboard is rosewood with a slightly tighter radius than a Les Paul, for example. Like all Vigier guitars, it uses stainless steel frets, superbly installed, sitting just inside the rolled fingerboard edge.

The overall geometry of the guitar is a little different from the classic single-cut as well. First, you notice the neck actually joins the body between the 14th and 15th fret; typically on a Les Paul that would be closer to the 16th fret. The neck, then, sits deeper into the body, but the combination of the heavily rounded heel on the thinner body and the deeper cutaway means access to the upper frets is excellent. Another consequence is that the bridge sits further down into the lower bouts. The bridge pickup, too, in relation to the scale length, is placed slightly closer to the bridge than you would find on a Les Paul.

The matt grey/black colour is vividly contrasted by the bright chrome hardware, from the ‘V’ headstock logo and artful G.V. emblem, through to the locking custom Schaller tuners, the pickup covers and the Tele-esque knurled knobs, and even the strap buttons. The proprietary hardware echoes the classic two-piece Gibson design yet both pieces are thoroughly redesigned. Both lock onto Allen key posts that allow overall height adjustment, and both pieces have a top radius that matches the fingerboard radius. Meanwhile, each saddle is adjustable for intonation via Allen key bolts on the rear-facing side. Both pieces are very streamlined and elegant, and the bridge certainly feels very smooth under your right-hand palm, while the tailpiece is slightly angled to match the rake of the strings to the bridge.

Custom-wound by Wolfgang Damm at Amber, the humbuckers are controlled by a deceptively simple layout of master volume and tone (with a .033 microfarad orange capacitor) with a five-way lever Schaller Megaswitch offering bridge humbucker, bridge single coil (slug), bridge (screw) and neck (slug) single coils (in parallel), neck single coil (slug), and neck humbucker. As ever, we have a Neutrik locking jack on the side, its red release button the only unmatched colour to been seen.

If you like big, beefy necks, then Vigier probably won’t be your first choice. But specifications alone don’t tell the full story. The neck here is virtually identical to any other Vigier neck and combines a thin depth - approximately 19.7mm at the 1st fret tapering up to 23.35mm by the 12th - with virtually modern Fender-like width and what feels like a shallow D profile. It ships with 0.009 to 0.046-gauge Vigier-branded stainless steel strings and a slinky action that measures 1.5mm on both treble and bass sides (the latter slightly lower than the factory spec of 2mm). Initially, that does feel on the low side, but it’s effortless and fast with a hugely precise immediate feel and a crisp, clean and even response. Heavier strings, of course, are no problem if you prefer; it’s a very easy guitar to adjust.

After the bulk of our reference Les Paul and even a more modern PRS S2 semi-hollow Singlecut, the G.V. Hollow feels like a feline supermodel. Played seated, those chunky tuners do contribute to a slight neck-pull, but strapped on, with its lightweight feel, it just becomes part of your body: a very comfortable instrument. Rather like its design, the sounds we’re presented with here don’t seem aimed at cloning an ES-335 yet they certainly ape its versatility. This very much has its own voice, and the Amber humbuckers have a nicely classic humbucking voice at the neck with a little kick at the bridge.

There’s clarity, too, and both tone and volume pull that back for a more muted, jazzier voice from the neck and less piercing bridge on cleaner, older amp styles. That ability to tame or voice the inherent clarity makes this a nicely versatile semi, although we did miss a dual-humbucker mix. The three inner single-coil sounds on the five-way selector drop the volume and provide brighter voices as you’d expect, and the relative proximity of the bridge pickup to the bridge maximises the highs. It also allows maximum contrast to the neck single coil and creates a mix that is more Tele than Strat in that regard. Add those sounds to a response that seems quick, dynamic and extremely even right across the ’board, and you have quite a palette to work with.

While you could certainly cover some smoky jazz with that neck humbucker alone, it’s when we move into more crunchy and gained voices that the Hollow begins to sound a lot bigger than its delicate-feeling build suggests. The neck humbucker is very expressive and vocal, whereas our more vintage-y ES-335-alike has turned to mush. Same with the bridge: that clarity without excessive honk really shines with quite considerable gain. Yet it’s somewhere between those two contrasts that the Hollow, for this writer at least, really comes alive. A little bit of juice from your amp enhances the resonance, which becomes hugely expressive to dynamics and pick attack - and it’s possible to envisage a version of the guitar with four controls and a shoulder-placed toggle for those of us who have grown up with that protocol. If we’re honest, the five-way and its placement isn’t the fastest to change in the heat of battle - but that’s about the only criticism we have of not only a finely made and fine-sounding single-cut but one that is hugely inspirational, too.

Patrice Vigier and his team have been making exceptional guitars for a considerable number of years; this G.V. Hollow might well be their finest to date. Despite its modernist features, it actually feels more like an old violin: perfectly shaped and weighted with nothing that gets in the way of its purpose. It’s a guitar for the serious player with not only superb playability but a voice that will sit equally well in a jazz combo or on stage rocking out with a festival headline act. There is a relaxed midrange here, an open resonance married with clarity, precise intonation and a touch-sensitive, dynamic response.