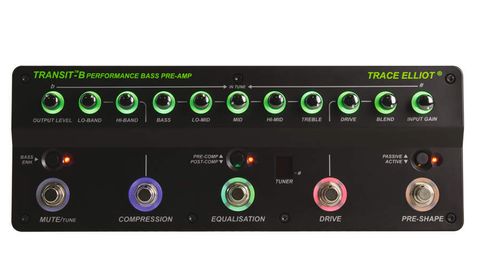 Great to see Trace back with a superb piece of practical design.

It’s great to see Trace Elliot back in the follow-spot again.

Things were quiet at Trace HQ for some time, but recently US owner Peavey seems to be right behind the venerable name once more. The first new product to break cover was the tiny Elf amp, a stripped-down 200-watt class D amp in a minuscule case that we reviewed and loved. That was quickly followed by a couple of small but high-quality cabs, and now we have the Transit bass preamp, a floor unit with all the functionality and routing options of a pro amp, designed to provide you with a quality front end for your processing.

Not that long ago, the idea of having your main sound shaping anywhere other than on the front of your amp would have seemed crazy. However, a growing number of bass players are swapping their towering backline rigs for a pedalboard, a preamp and a floor wedge or IEMs, and letting the PA do the job of amplifying their sound for the audience.

These are the very people for whom Trace Elliot is working to develop new ideas and products. It is not the first to do so, of course; Sansamp has been producing the near-ubiquitous Bass Driver preamp DI for some years now, and it’s become an industry standard. By comparison, the new Trace Elliot Transit B is definitely ‘next generation’, with the kind of pro-level functionality and processing that today’s bass players need and expect.

The first thing to say about the Transit-B is that it’s very well made. Anything that’s designed to be put on the floor and stepped on night after night needs to be robust, but the Transit-B is solid to the point of being over-engineered. Its heavy steel construction and pro-quality components mean that it’ll be perfectly suited to its naturally dangerous habitat. It’s also worth mentioning that it possesses superb ergonomics, with a brilliant, common-sense design that is clear to see on a dark stage and intuitive to use.

The single row of five colour co-ordinated footswitches illuminates the controls that are relevant to the function selected. For instance, hitting the Mute switch leaves just that switch and the tuner illuminated. Select the Compression switch and it glows blue, while the two controls above are illuminated in ‘Trace-Green’. This feature is like the dual band compressor on later AH series amps and it works brilliantly, allowing you to separately fine-tune the compression you apply to Hi and Lo frequencies. Like the compressor, the green-illuminated EQ is simple but effective. The five bands (Bass, Lo Mid, Mid, Hi Mid and Treble) allow fast, accurate EQ changes.

Trace was one of the first companies to select EQ frequencies specifically for bass guitar, and the EQ on the Transit-B is perfectly suited to its job. There’s even a Bass Enhance switch to turbo-charge the low end, and a separate Pre-Shape footswitch that starts your EQ adjustment at the classic Trace ‘smiley face’ graphic sound. The glowing red Drive switch illuminates a separate gain stage with its own Level and Blend controls.

Although it’s digital rather than valve generated, it’s smooth and nuanced; as much or as little distortion as you want can be dialled up and added to your clean sound at the stomp of a footswitch. Despite the length of time separating this and the last of the AH series of amps, there’s a surprising amount here that’s familiar, especially with regard to the sound. Trace equipment has always had that distinctive, attacking tone, and you can hear that in the Transit-B.

That said, it’s also incredibly versatile, and with a minimum amount of time and fiddling, you’ll soon arrive at the sound you’re looking for. One last important thing to mention is the very high standard of the preamp’s routing options. The combination of separate pre- and post-balanced outputs with ground lift, as well as multiple ¼ jack outputs, is amazingly useful, but is often absent on even the most expensive preamps. There is also a mini-jack Aux in and a headphone out.

In use, the Transit-B simply works. Remember, this isn’t an effects unit. You may wish to add a pedal or three, but the Transit-B is there to ensure that the sound you hear in your IEMs or wedge monitor - as well as the sound arriving at the mixing desk - is exactly as you want it. The Transit-B facilitates this as well as any equivalent unit that we’ve used.