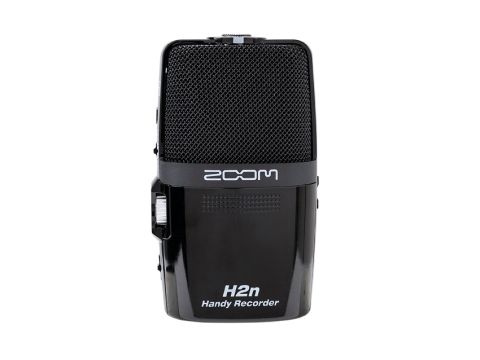 If surround sound and control over the stereo picture is important to you, you should seek it out.

The latest in Zoom's range of Handy recorders, the H2N is unique as far as we're aware, in that it features five microphone capsules behind its grille that can be utilised in four selectable recording modes.

It's the first handheld recorder to offer Mid-Side (MS) stereo recording (a mid mic facing at the sound source and a bi-directional side mic to capture sound from left and right), but also has an X/Y stereo mic array for conventional stereo and can record two-channel and four-channel surround sound.

Easily held in the hand and with 20 hours of use available from a pair of AA batteries, the H2N is eminently portable and a doddle to use - a large screen lets you see exactly what's going on and mic gain can be instantly set by a very accessible knurled knob.

Initiating recording from a standing start is very quick, as is file transfer to and from computer via USB - the unit can also function as a music player and has variable speed and pitch phrase-training facilities. Sound-wise, the mics do a great job of making quality recordings in all modes but MS mode is particularly useful if you want to control the width of the stereo field (even after you've done your recording).