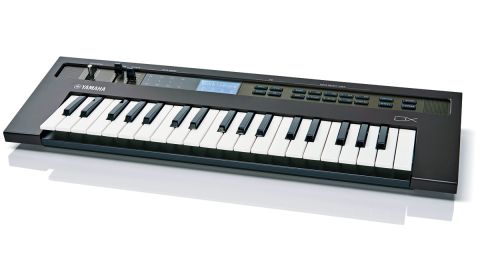 It's well built, portable, has an improved four-op engine with FX and it sounds suitably DX-y!

FM synthesis has been experiencing something of a renaissance lately, largely due to the popularity of soft synths such as Native Instruments' FM8, Primal Audio's FM4 and Digital Suburban's Dexed.

These authentic sounding, feature rich, backwards compatible soft synths have ensured that FM synthesis has stayed relevant for modern day producers. Save for the MOD7 engine in Korg's Kronos and Nord keeping FM alive in their Lead/ Stage models, the big players (and particularly Yamaha) have largely abandoned FM in favour of sample- based synthesis.

It's a real shame, as the only thing really holding back FM synths of old (including the brilliant SY77/99 and FS1R) was the lack of hands-on control. The DX200 module went some way to putting things right but it still required a computer to get the best from it.

Fast forward to today and we have the first new DX with a keyboard since 1988's DX11! This is big news and something folks have been waiting for for a long time, but will it address the key deficiencies of old FM, in particular the lack of hands-on control?

The Reface DX is built into the same high-quality enclosure as the other Reface models. This time though, it's a browny colour like the original DX7 but the similarities stop there - this new DX has more in common with the DX100 and so it features a mini-keyboard (three octaves compared to the DX100's four) and also uses four operators (FM-speak for oscillators).

Despite being one octave shorter than the DX100, the quality of the Reface DX's keybed is much nicer. The mechanism is based on a miniaturised Motif keyboard and you can really feel the difference between the Reface keybeds and other manufacturers' mini-key offerings.

Like the Reface CP, the DX also has velocity, though no aftertouch. One of my favourite parts of the DX100 was that it could be worn as a keytar and thankfully the Reface DX (and other Refaces) can be worn this way too, using the optional Keytar Kit.

The front panel is very clean looking. From left to right we have a pitch lever (also found on the Reface CS) and, similarly, it's a shame there's no dedicated mod wheel, though it responds to modulation commands over MIDI. Next up is the master volume and an octave slider.

Then we hit the unique 'Data Entry' section. One of the achilles heels of the original DX series was the conspicuous lack of real-time, hands-on control over key sound-shaping parameters.

To address this, Yamaha has implemented a clever touch panel with four columns that directly correspond to the four parameters columns showing onscreen (parameters shown depend on the mode/function selected). To change a parameter in real time, you simply tap on a red arrow to move levels up or down, slide your finger over the whole column for bigger/faster parameter changes/sweeps, or tap on a circle for switching functions on and off.

In practice, it works very well - it's intuitive and pretty addictive and it really invites tweaking, taking the headache out of FM programming - rejoice! The only thing missing is a way to control the touch panel's sensitivity, as it takes a few too many finger sweeps to move from 0-127. All things considered though, it works well, plus you can control the key sound-shaping parameters over MIDI via most controllers too.

Firstly, the sound quality massively surpasses the DX100 with its aliasing and hiss and noise (okay that's part of its charm too) but we often have to gate the DX100 or filter out the tops to make it usable. Instead, we now get pristine FM which sounds wide, rich, full and shiny with no noise.

It reminds us more of our SY77 in terms of sonic quality than the DX100 (which is undoubtedly a great thing) and it can make all those classic DX sounds, though unfortunately there's no backwards compatibility with older models' sounds.

The other big change is we now have continuous feedback on the operators (feedback changes the tone/ character of a basic sine wave). Much like a modern Moog oscillator with a continuously variable waveform, you can now move from square, through sine, to saw continuously which nicely extends the original four-op DX100 engine.

In addition, we can now connect the operators in 12 different ways (algorithms) as opposed to in eight ways on the DX100, allowing lots more tonal variety. In terms of familiar modulation facilities, it's still fairly basic but there's a MIDI syncable LFO with seven waveforms that can be sent to pitch and amp (and applied to all, or individual operators), plus there's a four-stage amp envelope generator and a four-stage pitch envelope generator. We were hoping for a filter too but, alas, no luck!

Above all though, the basic four-op DX is back with a vengeance and having four parameters onscreen at the same time fortweaking in an intuitive way is a huge improvement over the old DXs with their basic data entry sliders/ cryptic-screened interfaces.

There are four banks of eight (writeable) sounds onboard too, which although stingy, is better than the other Refaces. To top things off, there are some impressive effects (unlike the old DXs) and a basic but handy MIDI-looper.

It's genuinely exciting that Yamaha is revisiting FM once again and improving it along the way. Roll on more new DXs!