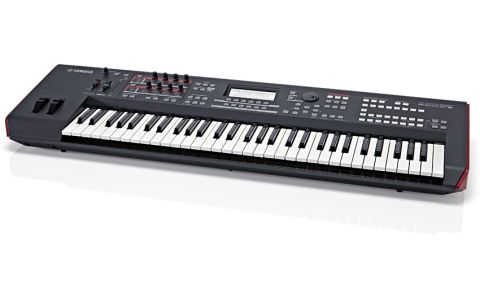 The upgrades are welcome - and it still trumps the competition in terms of sonics and power - but the interface is showing its age next to the Krome and Roland FA.

Yamaha's Motif range has now been in production in its various incarnations for a staggering 13 years. Things have been tweaked and continually improved over this time but the Motif range has remained well-respected due to its solid sounds, reliability, versatility and deep editing facilities. The latest Motif-derived boards to be launched, the MOXF6 and 8, continue firmly in the same tradition, taking the best sounds and features from the flagship Motif XF range and distilling them down into more affordable packages.

On first glance you'd be hard pushed to tell a MOXF6 from a MOX6. Nothing has changed cosmetically except for the end panels, which are now a bronzy/red colour reminiscent of the old Korg Karma. The only other noticeable difference is underneath, where there's now a slot for adding the flash expansion card option.

Build quality is generally sturdy, if a little plasticky, but we wouldn't have any reservations about using the MOXF6 on stage regularly, though we'd want a sturdy flightcase to protect it. The portability is great and the whole package weighs in at just 7.1kg (15.6lbs), which is light enough to pick up in one hand.

The 61-note synth action keybed feels very nice to play and responds well even when playing piano sounds. It's also nicely cushioned at the bottom of the keystroke though, as seems the norm these days, there's no aftertouch.

Navigating the MOXF6 isn't the most rewarding experience, especially after testing Roland's latest FA, which has one of the most intuitive interfaces around. The screen on the MOXF6 is basically the same screen that this writer had on a 1998 Yamaha EX5! Compared to the sizeable colour screen on the FA and the large colour touchscreen on the Korg Krome, it seems pretty outdated.

Also, as it's monochrome it's hard to decipher one area of the screen from another and with lots of parameters to cram in, deep programming can be tiring. This is further compounded by the amount of button pressing involved during editing tasks and the sheer number of front panel options can also be a little overwhelming.

Like the MOX6, the MOXF6 has eight real-time dials for directly controlling 32 important sound parameters on the fly including the various filters, portamento, ADSR, volume, panning, EQ, effect levels and the arpeggiator. These dials can also be mapped to the VST editor/Cubase AI (both included) or you can use them to control other DAW's when in DAW Remote mode.

In addition, you can now press both knob control buttons together for quick access to part volume and pan in Performance mode and part volume in Mixing mode.

Unfortunately, the filter stepping issue we highlighted when we reviewed the MOX8 is still present and we attribute this to the dials being of the click-stepped type, rather than smoothly travelling pots. So, if you want to make smooth filter changes it's essential to assign the filter to the mod wheel or to a control pedal.

The sound engine on the MOXF6 is based on Yamaha's acclaimed AWM2 (with expanded articulation) architecture. Each voice can have up to eight elements and the waveform ROM has been increased from 355MB (on the MOX) to 741MB, which also results in 136 more voices including the quality S6 grand sample.

Polyphony has also been doubled to 128 notes (so less note stealing) and the entire waveform ROM of the flagship Motif XF is now onboard which is fantastic. The range and quality of the sounds, presets and arps is class-leading and the warm and natural vibe is where the MOXF really scores above its rivals.

Remember there is no VA engine onboard, yet the synth sounds have a very analogue feel and presence - putting a sawtooth poly patch up against an analogue Alesis Andromeda, it was surprising just how close you could get to the raw tone. So, if you're after warm pads, juicy and cutting leads, deep basses and funky comping patches, the MOXF is hard to beat.

The envelopes are punchy, the quality of the onboard effects is very good and there are also three handy effect bypass switches plus two assignable switches that default to the Expanded Articulation characters (such as muting, harmonics and slides).

Acoustic and electric instrument sounds are also a strongpoint of the Motif sound engine, including some expressive and realistic sounding solo strings and brass, very authentic Rhodes and Wurli emulations, excellent acoustic pianos and lovely acoustic and electric guitars. The clavinet and organ patches could be more authentic but all things considered, there's everything that you could want in terms of solid staple sounds.

The MOFX has been expanded in all the right places (bigger wave ROM, flash expansion slot, more insert effects, doubled polyphony) and the AWM2 engine despite its age, still trumps the competition in terms of authentic ear pleasing sonics and raw power. It's great that you essentially get all the sonic power of the flagship Motif XF for a lot less money and the included arps, sequencer and pattern recorder are also immensely powerful tools.

The remote DAW integration and VST editor are also essential inclusions and really speed up deeper editing tasks. But the MOXF's weak point is its small monochrome screen and unintuitive workflow.