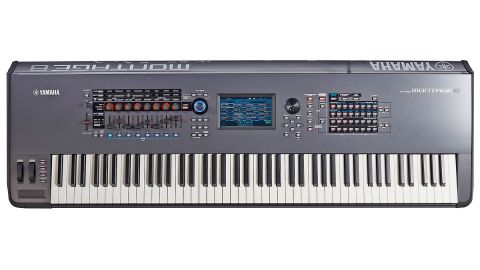 The Montage is a uniquely powerful sound design and live performance machine, though beware of the often-overwhelming depth!

Today DAWs are taking over where workstations such as the Motif once ruled supreme.

Now, the Motif's successor is here - the Montage. There are three models in the range including 61 and 76-note synth-action models and this 88-note weighted model (all with aftertouch).

The Montage 8 is a heavy beast at 63lbs. It will be a great centrepiece in a large studio but for more compact spaces, the 61 or 76-key models are better suited. Ideally, we'd like a 73-note weighted version, or a more stiffly sprung waterfall keybed version which transverses synth sounds and pianos nicely without the extra weight.

As weighted keybeds go, the balanced hammer action keybed on the Montage 8 feels high quality. However, we found its bounce-back a little sluggish and it struggled to keep up with our fingers on faster runs and single-finger trills - comparing it to our Yamaha U1 upright, the Montage's keybed felt heavier and in need of more positive feedback.

Build-wise, everything is up to (or surpasses) Yamaha's usual high standard. The overall look is sleek with a metal top panel in sparkly gunmetal and there's a lovely curved back which enables you to look over and see the many sockets/labels easily.

It certainly feels tank-like and the controls are very solid with nicely stiff and positive selection buttons, rubberised Nord-style knobs with LED ring dials (that relay knob position at a glance) and eight plastic-capped faders with LED meters that can be assigned to various duties including part volume levels and organ drawbars once set up.

One downside is that, while the part/function/element selector buttons on the right side of the panel glow orange and speed up programming/navigation massively, it's hard to distinguish when (for example) a part is muted or unmuted as this only involves a subtle change of brightness - multi-coloured LEDs to show different states would have been clearer.

The heart of the Montage's programming system is the full-colour touchscreen plus data wheel/cursors, though surprisingly the plethora of real-time controls (faders, knobs, SuperKnob etc) don't really get involved with the editing process. Regardless, the screen feels generally snappy with little lag (there's seamless sound switching too) and it's easy enough on the eyes, though we would have liked to see even more contrast/colours/graphics along the lines of the Korg Kronos 2/Roland Jupiter/FA-series.

There's also no apparent way to adjust the screen's brightness, though viewing is easy at all angles. Navigating the OS and selecting/editing is simple - use any finger to select functions/parameters and change values using the data wheel. There's also a pop-up numeric keypad to speed up programming.

Now the SuperKnob! While it may seem gimmicky at first, it serves a very important function as a central 'macro' knob that enables control over a huge array of simultaneous parameters manually, or via the 'motion control' function which allows automation of the knob via motion sequences (or over MIDI).

The knob glows several different user-definable colours and flashes in accordance with the overall tempo. It can also be controlled via a foot pedal for hands-off control over many parameters simultaneously - you could morph from one sound into another, fade in an FM-X layer over an AWM2 layer, control several layers' volumes or filters or effect levels/parameters, with some going up and some down simultaneously.

It really feels like there are no bounds to the Montage's control and sound design possibilities which is great (yet scary too)!

However, with this comes some inevitable head-scratching and, while Yamaha has gone a long way to making the system as intuitive as possible, it can feel overwhelming at times. We also wish the assignment system was more straightforward (like Nord's 'morph' system or DSI's simple source/destination assignment system on the P12/Pro2) but as we are dealing with a largely screen-centric interface here with a ridiculous number of editable parameters, it's a fair compromise.

You also have to remember that controller assignments are made not just on a common/overall level but also at part level where all the real-time controllers are available for each of the 16 parts and more besides; it's essentially a super-complex digital modular! Be sure to read the manuals and the excellent programming tutorials (under articles>resources at www.yamahasynth.com, and official/user video tutorials on YouTube).

Sound structure-wise, Yamaha has simplified things compared to the outgoing Motif, so now there are just three levels; Performance, Part and Element. A performance (there are around 1,900 onboard!) is like the old 'Multi' and contains up to 16 MIDI parts that can be mixed/panned/ layered/split (and more).

A Part is like an old 'Voice' and contains up to eight elements (ie waveforms/ oscillators) in AWM2 mode, or eight operators in FM-X mode and both types of engine can be mixed/layered/ split, (though unlike my beloved SY77, there's no RCM synthesis, so no way to use AWM2 or user-created waveforms as modulators within FM sounds, which would have been great).

Making performances is easy to do and adding a layer(s) to a performance on the fly is as simple as clicking the '+' button on a blank channel strip(s), category searching your sound onscreen and job done.

You can also import your own 44/48kHz WAV samples from a USB stick and use them as you would any other element and there's 1.75GB of user flash memory, so once imported you can hold your samples/third-party libraries in memory for instant loading and retention after powering down. Also note that Montage is backwards compatible with Motif XF AWM2 voices too.

Finally, you can drop your performances into 'live sets' for easy selection and the slick 'category search' function makes it easy to put performances and live sets together quickly from the 1,000s of presets/ user sounds available.

Now some 'to-be-aware-ofs'! Firstly, there's no dedicated 'clonewheel engine' and, though there's a pretty tweakable rotary-effect and some good-sounding B3 emulations onboard, if you want the eight faders to operate as drawbars you have to set them up manually which is time-consuming.

We'd really like to see Yamaha launch some new performance templates where the set-up and routing for drawbars and percussion/vibrato is all done/ pre-wired. Secondly, while AWM2 does a great job, there's still no dedicated virtual analogue mode and it would have been great to have the killer-sounding modelled analogue engine from the Reface CS included (which feels more analogue-like than AWM2 does).

Thirdly, we would have also liked to have seen the superb 'spectral component modelling' sounds/engine from the Reface CP and CP4 included, as they have some killer EPs, clavs and Wurlis onboard that often rival or surpass the ones onboard the Montage. And finally (unlike the Motif XF), there's no direct sampling or multi-track sequencing, just a bare-bones 16 track 'recorder' with basic editing (hence the 'Music Synthesizer' label vs the Motif's 'Music Production Synthesizer' label).

Despite these concerns, we enjoyed the Montage greatly. Overall sound quality is stunning; wide, clean and precise with enough warmth and sheen. Yamaha's acoustic sounds are also beautiful here and the CFX/ Bösendorfer grands sound gorgeous, the clavinets are now more authentic and the EP 'gallery' performances are great. The acoustic guitars are also killer (especially combined with the arpeggiator) and the strings, brass and woodwinds are very inspiring.

The FM-X engine (with eight operators, 88 algorithms, feedback, 'spectral skirt' function and access to the 18 filter types) is comprehensive and sonically versatile, with most of the classic DX sounds onboard too, plus there's a conversion utility at Yamahasynth.com for converting/ dropping original DX sounds into the Montage.

Add in Motion Control for evolving sounds, the excellent FX engines/vocoder/envelope follower, powerful arpeggiator and 16 stereo out/three stereo in audio/MIDI USB interface, and it all adds up to an extremely powerful/versatile machine - a worthy successor to the Motif.