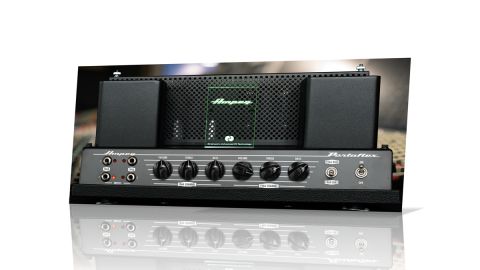 It may not deliver all the bass tones you need, but B-15N beautifully captures that classic retro sound, transforming your clean DI into something totally mix-ready.

In contrast to the SVT amps, the B-15N has a more modest power output, with a 30-watt all-tube amp head driving a 15" loudspeaker cab. From the outset, this 1960s classic found its niche in studio rather than live situations, and is clearly an ideal candidate for DAW users.

Also rather pleasing (and one better than last year's SVT's) is that the B-15N is Unison enabled, emulating the impedance and gain-staging of the hardware.

The plugin features two different amps, the 1964 B-15NC and the 1966 B-15NF, with dedicated Volume, Treble and Bass controls for each. Amp selection is via the jack Inputs on the left, and this also incorporates two fixed level settings (0dB and -15dB) using the upper and lower rows respectively.

This is great if you're recording via the plugin, easily accommodating both active and passive pickup levels. Further tone shaping uses various cabinets and the FX Rack.

Half the presets use the original matching Ampeg 1x15" cabinet, with three further cabinets - 8x10", 4x10" and 1x15" - making up the rest. In each case, you'll find one preset incorporates desk EQ and one is completely flat. Mic choices, although not specified in detail, include dynamic, condenser and ribbon, sometimes using a combination of mics.

In all cases, mics have been positioned to capture the best sound possible, and although, on paper, this approach is less flexible than some options, it's quick and reliable. One final option, Horn, allows you to add a horn impulse from the 8x10 cabinet, which is great for enhancing the bass attack.

In their raw state, with no cabinet selected, the amps sound surprisingly different. The 1964 Channel is very full in the low to low-mids, and is great for filling out a weedy DI sound.

The 1966 Channel, on the other hand, is more scooped in the low-mids and brighter on top, delivering a more modern sound with more attack. Moving on, the Treble and Bass controls are at 5kHz and 40Hz respectively, allowing for reasonable tone sculpting, and there's an independent valve Bias setting (1964 or 1966), which means you can mix and match amp and bias, although in practice we found the differences almost imperceptible.

In contrast, the Cabinet and Recording Chains make a big difference, with a good selection of both upfront and more rounded tones.

Access to the Cabinet and Recording Chains is in the hidden FX Rack panel, which occupies the top half of the interface and can be opened using the menu bar or simply by clicking on it.

Here you'll find a bunch of plugin-specific extras to fine-tune the sound, including a Noise Gate with Range control plus high- and low-pass filters (named 'Tight' and 'Smooth' respectively). The filters also include independent Pre and Post switching, so you can tidy up both the DI input and amp output. Finally, there's a pre- preamp Input Gain to assist with gain structure, and an output Power Soak level.

Combining these with the amp gain (Volume), it's quite easy to achieve the warm, slightly fuzzy break up associated with the original hardware, and although we're not talking full-on harsh distortion, B-15N can still deliver a more edgy sound when you crank it up.

Overall the B-15N is a great plugin that enhances the two amp emulations with some useful extras and an impressive array of quality cabinet settings. Even so, you can never drift too far beyond that core 60s sound, making it a focused rather than all-round plugin.