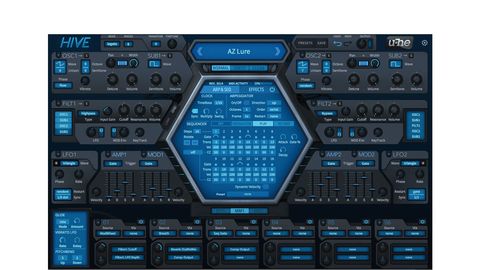 u-he's elegant masterpiece is easily the best choice for anyone looking for a straightforward, fat-sounding, and future-proof virtual analogue synth.

With its eyes firmly set on Sylenth1's virtual analogue crown, Hive is u-he's most accessible synth to date. But will it give you the same buzz?

In 2007, newcomer LennarDigital pulled the ultimate troll move on soft-synth-loving computer musicians, releasing an absolutely stunning debut in Sylenth1, then all but disappearing. In the years since, a few minor updates have surfaced, but the instrument still doesn't offer 64-bit compatibility on OS X, and there's no sign of a follow-up.

A few synths have attempted to emulate Sylenth1's virtual analogue formula of straightforward design and great sound - most notably, Reveal Sound's Spire - and have been warmly welcomed by those looking for a contemporary, actively supported alternative to it, but nothing has replaced it as the go-to plugin for quick, awesome-sounding virtual analogue synthesis. Until now...

The formidable u-he has confidently stepped into the ring with an all-new new synth boasting an extremely similar architecture, plus a few enticing extras to sweeten the deal.

The main difference between Hive (VST/AU/ AAX) and Sylenth1 is its oscillators. Whereas Sylenth1 has four oscillators, each capable of up to eight-voice unison detune, Hive has two, each running up to 16-voice unison.

The oscillators offer a choice of nine wave types - Sine, Saw, Triangle, Pulse, Square, Half pulse, Narrow pulse, White noise and Pink noise - and each is accompanied by a sub oscillator that can be set to any of the same shapes. The sub oscillators have their own volume controls and can be transposed up to +/-24 semitones.

Like Sylenth1, Hive's oscillators feature Random (free) and Reset (synced) phase modes; but they also add Flow mode, under which the phase of each note picks up where the previous one left off. This keeps the phase relationship (and, therefore, the beating) between oscillators continuous, although the difference between Flow and Random mode is subtle.

Also unlike Sylenth1, Hive offers pulse width modulation, though as with a few of the synth's other settings, it doesn't have its own knob, being accessible only via the modulation matrix.

The filter section also offers a few improvements over Sylenth1's, including slightly more sophisticated routing: each oscillator and sub oscillator can be routed to one or both of the filters, and Filter 1 can be routed into Filter 2.

Lowpass 12, Lowpass 24, Bandpass, Highpass, Bandreject and Peaking modes are available to both filters, which (in certain synth engine modes, which we'll come back to) can self- oscillate, adding to the instrument's already considerable creative potential.

Hive's parameters are arranged on either side of the central hexagon, with Oscillator, Filter, LFO, and Amp and Mod envelopes 1 on the left, and their "2" siblings on the right.

Rather cleverly, the two sides can be connected: with the Link button active, adjustments to the left-hand parameters also affect the right-hand equivalents, with the offset between them maintained.

There are a few other areas where Hive makes marked improvements over its inspiration, including a resizable interface, parameter locking for making individual controls immune to preset changes; categorised preset folders; a dedicated vibrato LFO; unipolar LFO mode and LFO phase control; the ability to record transposition, velocity and MIDI CC values into the Sequencer; undo and redo buttons; saving and loading of Effects setups; and, last but not least, a choice of three "synth engines": Normal, Dirty, and Clean.

Changing the synth engine affects the shaping of the envelopes, filter architecture and detune behaviour, giving the instrument three contrasting feels that are apparent with even the most basic of patches.

When working with more involved sounds, switching the engine has a more dramatic effect, so it's no mere gimmick: Hive's palette of sounds is made significantly broader by this clever feature.

The rest of the synth is very similar to Sylenth1, particularly the Effects and Arpeggiator & Sequencer pages. The Effects section includes Distortion, Chorus, Reverb, Delay, Equalizer, Compressor and Phaser sections, almost identical to Sylenth1 in terms of functionality, and delivering great results.

Likewise, the Arpeggiator and Sequencer are extremely close to those of LennarDigital's synth - the sequencer offers up to 16 steps with transposition, tied notes, and Attack, Decay and Gate controls, while the arp has six arpeggiator Directions (Played, Up, Down, Up+dn 1, Up+dn 2 and Random) and four Order modes (Serial, Round, Leap and Repeat).

Extra niceties include Swing and clock Multiply parameters, and the ability to disable host sync.

So, there's a big buzz about u-he's latest synth, but is Hive the Sylenth1 killer the world has been waiting for? In terms of its feature set, it's a quantifiable improvement, but when it comes to the all-important - and subjective - question of how good it sounds... Well, that's open to debate.

Sylenth1 has a duller but warmer timbre that's ideal for impersonating analogue synths, while Hive is more modern-sounding, fizzier and punchier. We're not going to be uninstalling Sylenth1 any time soon, but Hive seems almost certain to take its spot as our most-used virtual analogue synth.

What's more, u-he has a great track record when it comes to supporting and improving its products, so if you're torn between the two, we'd say that Hive is the one to go for.