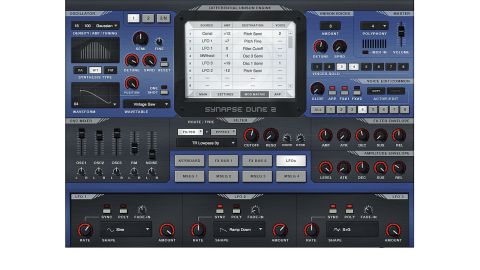 The best-sounding synth we've heard in quite a while, Dune 2 is powerful, flexible and bursting with a character all its own.

Expanding on v1's powerful per-voice modulation capabilities, Dune 2's eight unison layers can be spread via detune and pan controls as before, but can now be directly edited globally or individually (each voice can be soloed), unlike the original where you had to program changes to the eight unison layers via the modulation matrix (which you can still do too). It's important to note that Dune 2 is not backwards compatible with Dune 1 presets.

Dune 2's oscillator section has been upgraded and is now capable of building complex stacks on oscillators 1 and 2 (see Fatter than fat) that combine with the eight-layer unison for up to 520 oscillators per note, or 8320 simultaneous oscillators at full 16-voice polyphony!

Are these impressive figures actually meaningful in real-world usage? Indeed they are: we were able to fire off all 8320 oscillators with filter key-tracking, using only about 30% of the CPU in a four-year-old Intel i7 PC - not that this is something we'd probably ever do outside of testing, of course.

On a similar note, you can set the LFO modulation rates between Normal, Fast, Very Fast and Audio Rate modes, which require progressively more CPU juice.

Oscillators 1 and 2 can each be set to one of three synthesis modes: Virtual Analogue (very fat-sounding sawtooth, pulse and triangle waveforms), WT (wavetable) or FM.

In WT mode, you have access to 27 banks of wavetables - including 'Legacy', which comprises the 60 waveforms from the original Dune - with the awesome newly added ability to smoothly morph from one to the next (when modulated, ideal for crafting detailed, moving pad patches).

Another interesting wavetable consists of 22 transient waveforms, seemingly sampled from a variety of live instruments, and including drum and percussion sounds as well as piano, bass and flute.

Having said that, it can produce a variety of basic FM timbres, and when you factor in the eight-layer system with up to 32 stacks per voice, the point is not so much to revisit traditional FM synthesis, but more to explore avenues offered by combining it with the synth's insane multi-oscillator capabilities.

To reiterate: each of Dune 2's eight layers can be deployed 100% independently of the others, sort of like the two layers in LennarDigital's Sylenth1.

Oscillator 3 is rather more limited than 1 and 2, having evolved from the original Dune sub oscillator, though now being freely tunable. There's also a noise generator with adjustable stereo width and its own high- and low-pass filters, and a ring modulation option between oscillators 1 and 2.

Dune 2's filter has a Drive control and a choice of 17 types, including numerous high-pass, low- pass and band-pass variants, as well as 14 subsequent filter 'effects' for further processing - notches, combs, distortion, etc.

The new filters are based on a zero-delay feedback design, as brought to public attention by u-he's Diva and Native Instruments' Monark. They sound exceptionally smooth and utterly convincing in terms of 'analogue' realism.

Other new features include four MSEGs (MultiStage Envelope Generators) that can be easily edited to produce complex bespoke modulations, including tight rhythmic effects; the addition of a Slide function to the arpeggiator; and the ability to import MIDI files for use as arpeggiator sequences.

Individual unison voices can be routed to either of the two Master Effects busses, which now include two delays, two EQs, distortion, phaser, chorus, reverb and compression modules. These are all exceptionally high quality for built-in effects - especially the reverb - and can be ordered however you please.

Between its well-equipped oscillators and flexible zero-delay feedback filters, the overall sound of Dune 2 is distinctly clean and rich in character. It can certainly roar and growl when that's what you want, but the general vibe is expensive-sounding and glossy.

You can tell that it's digital, even though it confidently exudes many of the qualities of vintage analogue hardware synths. Perhaps this unique character is partly down to the complex stereo decorrelation brought about by all that oscillator stacking and unison layering.

Dune 2 is definitely one of those all-rounders that can deliver most of the sounds you're ever likely to want from a synth, from lush pads to thick basses and soaring leads. As well as its extensive feature set, it also boasts impeccable sound quality and unbelievably low host system resource usage.

If the original Dune was something of an under-rated gem, the remake is surely destined for modern classic status.