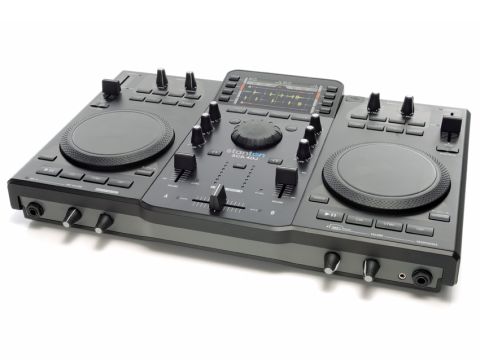 The ultimate all-in-one DJ solution that even hardened CD jocks will enjoy playing parties with.

There have been a few units which attempted to ditch the laptop when DJing, but nothing has really managed to deliver the correct experience at the right price. Now, Stanton are having a go with their compact and affordable SCS.4DJ.

Whipping the unit from its box you immediately see that Stanton have compromised on the build quality to keep the price low. The SCS.4DJ isn't exactly flimsy, but it's slightly creaky and plastic feeling.

The good news is that it's light, portable and relatively compact, comparable to a regular DJ MIDI controller but benefits from both master phono outs and balanced quarter inch jacks. Similarly, the headphone port on the front comes in quarter-inch and 3.5, so no more adaptor nightmares.

The central 4.3-inch colour screen is where everything happens. Here you're able to browse you entire library, create playlists, sort by BPM, album or artist and more. The general layout is a familiar two-channel DJ mixer, with three band EQ, headphone cue buttons and faders.

It's strange that Stanton have chosen to leave off any sort of gain control, even if there's a certain amount of normalisation after analysis of the tracks. It means level matching has to be done on the faders and EQ - gain control would add that extra layer of controllability and familiarity.

How does the analysis work? Well, once you stick a USB key in, the software within the SCS.4DJ automatically starts scanning your collection. This is where my first hopes were slightly dashed as this process is very slow.

So jacking in 100+ songs and expecting BPM counts and Sync'd playback isn't going to happen very quickly and certainly shouldn't be done at a gig - preparation is key to getting the most out of the SCS.4DJ. Once you've scanned your collection, small additions could be more efficiently done on the fly.

Tracks that have been scanned conveniently turn white while scanning tracks remain red. Songs that are yet to be scanned tracks can be still played back, but no waveform display, looping or syncing is possible.

Navigating your way around the unit's browse and waveform display is simple, but sometimes feels a bit slow. Just like the track analysing, it's clear it's not the fastest CPU inside the Stanton, but for nearly half the price of a decent laptop, it's not so slow that I can really complain too much.

There's also talk of a fully-fledged library app, similar to Rekordbox by Pioneer, which will hopefully make pre-analysing your collection on your computer, then exporting it to a HDD possible.

While mixing tracks, a playlist is automatically created, which can then be saved to your USB device.

I found the sync function to be pretty reliable on most music except complex Hip Hop beats and really broken D'n'B, but not any better or worse than analysis on other machines. The play and cue functionality was quite frustrating as there was no fast way to skip through a record while cueing it up.

Scratching with the jogs is amazingly, pretty decent, but I doubt purists are going to be looking at a device like this for turntablism anyway. Even so, it's nice to know you can get a realistic wiki-wah out of the SCS.4DJ if you want it.

The effects are basic but work well enough with either a filter, flanger, slice or delay effect per deck, selectable one at a time. Effect sync is pretty ad-hoc with markers around the rotary controls but no notches so you have to make sure everything lines up, but in practice this wasn't a problem at all.

One of the other extremely cool features about the device is the simplicity of recording a set. Hit the record button with a USB device connected and you're done!

The unit even shows you the space left on connect devices and you can select the appropriate device to record to. Obviously, recording a WAV and scanning tracks from the same USB device could prove problematic.

Overall I found the SCS.4DJ very impressive and easily one of the best self-contained DJ systems there is. It might not be the most robust of builds, and it's not as fully-featured as a controller and laptop setup, but it's such good value and more importantly, so much fun to use that this isn't a problem.

The simplicity and sparse layout are also massive positives, making the unit extremely easy to use and get going with. For a beginner this is a great start to digital DJing, but even as a unit for house parties or mobile jocks, the auto DJ function and ability to carry so much music in a light, ready to go package is extremely appealing at this price.

As a DJ that is more at home on bulky CDJs and pro mixers, I still got excited by the idea of throwing this into a bag and being able to quickly DJ anywhere. The ability to record mixes at the push of a single button is very useful to capture everything you mix.

The only drawback of the unit as a whole is the lagging reaction speeds when moving between pages on screen and the ultra slow analysing of tracks. But as a single unit you can DJ with, nothing else comes close to beating it at this price.