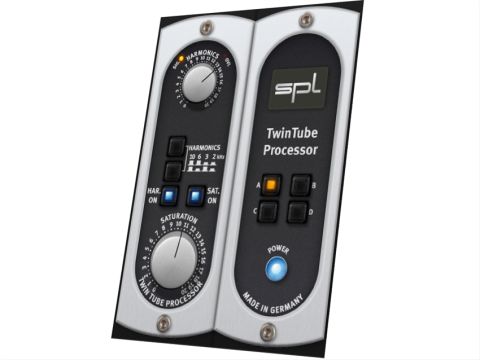 SPL's Analogue Code Twin Tube Processor is a cracking little plug in, but it'll cost you.

Based on SPL's hardware modules, the Twin Tube is designed to replicate the saturation and presence effects of tubes. The company's Analogue Code system transfers this as faithfully as possible into the software domain.

The simpler of the two processes is saturation, and this is created by pushing the tube beyond its normal limits. This results in the gradual onset of harmonic distortion, accompanied by signal limiting.

It's a classic processing effect that can be used subtly to fatten up sounds and also excessively to add audible colouration. Keeping things simple, the Twin Tube includes a simple saturation level and on/off selector.

The second more intriguing process is the harmonic enhancer. This uses a special circuit for overtone processing that reacts dynamically to the signal. There are four frequency settings that influence the nature of the overtones produced (2, 3, 6 and 10kHz), and the overall effect 'pushes' that region to the foreground.

It's worth noting that, although the process 'enhances' the sound, it doesn't work in the same way as a traditional enhancer. Once again, it's a one-knob affair, this time with two frequency selector buttons.

Capturing tube-type processing in software form is a bit of a challenge, and many tube-based processors are influenced by transformer input and output stages. Indeed, SPL's hardware Twin Tube can be purchased with transformer input/output stages, but it's the transformerless version it's modelled for the plug-in.

So how does it sound? The saturation effect is instantly likeable, primarily because it doesn't sound like a dodgy overdrive. In use, its behaviour is quite dependent on the type of sound you process - sounds with plenty of low and mid frequencies benefit the most.

Bass, for example, gains low-end thickness, and you can create a good saturated kick drum that's not unlike a tape saturation sound. For acoustic guitar, subtle use fattens the sound.

The harmonic control is more like a cross between an enhancer and an EQ. The two frequency selector switches combine to select the four frequencies. Beyond this it's simply a case of winding up the control. Because this is boosting frequencies, pushing things hard can cause considerable level change, so here it would be useful to have an output level.

As for tonality, again the effect is never really nasty, and like SPL's EQ Ranger plug-ins, it's reminiscent of the best analogue gear. Importantly, it can generate as well as boost frequencies and of the many enhancer plug-ins we've tried, it's by far the most convincing.

Like its siblings, SPL's Twin Tube wears its analogue heritage with pride, and the result is a highly usable albeit quite specialist plug-in. There are certain situations that will be calling out for this sort of processor, and it's then that the slightly steep price tag will make perfect sense.

Listen to what the Twin Tube Processor can do: