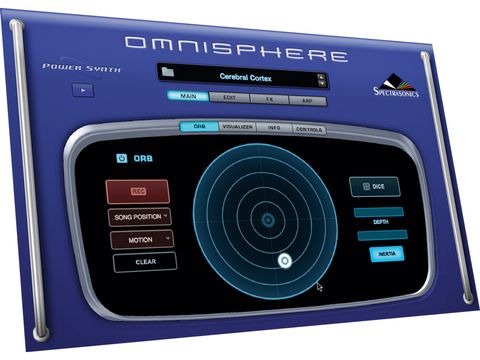 While there are plenty of third-party synth plug-ins available on the market-place today, it's fair to say that few pack as much sonic punch and are capable of quite such an array of sounds as Spectrasonics' Omnisphere.

We were lucky enough to run the rule over this synth behemoth when it ﬁrst landed, and were staggered by its capabilities.

You'll recall that the 'oscillator' content for sound development in Omnisphere contains the famous burning piano, sampled lightbulb ﬁlaments and a wide range of other leftﬁeld sound sources and, combined with a monstrous synth engine, this gives Omnisphere a unique, 'organic' sound.

A major Omnisphere update is now available for free to all registered users, and it's signiﬁcant enough that we decided it was worthy of a review in its own right… So what's new?

The Omnisphere makover is most dramatically represented by the 'Orb', which is a circular real-time sonic manipulation window, representing a kind of 'radar' read-out, complete with a centralised target.

The original patch lies at the centre of this target, so by moving the point which you'll ﬁnd there away from the centre, around the circles, parameters relating to the loaded patch begin to change, producing a constantly evolving set of sonic variations.

What's great is that the Orb has been conﬁgured for every single patch in the library, with optimum settings to produce radical or subtle sonic manipulation depending on what seems most relevant for the sound you've loaded.

Better still, however, if you don't like the sonic variations offered by the default Orb parameters, you can click the Dice button, which 'rolls' in a set of replacements, providing a second collection of assigned parameters.

Indeed, you can keep doing this until you ﬁnd a collection of parameters that allow you to create the variations you can hear in your head.

Sufﬁce to say that, while preserving the sonic start-point of any program, this feature alone provides hours of intuitive sound design capabilities.

For iPad owners, the news gets even better. Orb is also available via the Omni TR (Touch Remote) iPad application, which can be downloaded for free. When installed, this seeks out Omnisphere over Wi-Fi and then allows for all Orb action, alongside functions such as patch browsing and loading to be carried out remotely.

Manipulating Orb parameters with your ﬁnger rather than a mouse makes sound design much more fun for starters, but the other appeal will be for live users - Orb is attractive and could easily be patched into a video display for real-time manipulation by DJs and performing producers.

Omni TR allows for greater control than just Orb manipulation - you can latch sounds so that, for instance, animated sequence sounds keep playing, so if you're using Omnisphere live in mutli-mode, you can build up a sequence of sounds, all of which will sync, before moving on to control their tone qualities via the Orb.

Also new is a zoom feature for existing Omnisphere pages that require greater screen acreage, such as the Harmonia page. Harmonia allows you to create monstrous patches of up to 10 sound sources but until v1.5, editing of these has been a touch ﬁddly - an independent, larger page is therefore very welcome.

New effects are included in Omnisphere via the Reducer and Crusher options via the new Waveshaper module, too. These allow bit reduction and sample frequency reduction at the oscillator stage so the options for darker, harsher and grimier sounds built from scratch is extended.

This goes further, as you can modulate these effects, meaning that if you use the arpeggiatior as your source - for instance, you can create buzzy, gritty running sequences that are perfect for glitch music and darker TV-thriller type sounds in particular.

If more extreme sound design is your thing, the Granular options are for you. Again assigned to its own dedicated zoomed page, this employs granular synthesis techniques to break sounds up into tiny pieces and then rearrange them in real-time via a series of user controls.

Options here include Grain Depth, Intensity, 'Shooting', Spread, Pitch Grains and so on, all of which affect a different aspect of the rearranged sound.

The results can be extraordinary and comprise a sound designer's dream come true, as they can either radically warp or add subtle ﬂavours to sounds such as unpredictable vibrato, wah or tremolo.

Omnisphere was already a killer plug-in, but this update dramatically increases its appeal yet further and for registered owners, it's a no-brainer to immediately download and update.

The more signiﬁcant question is whether this update will attract new users. Bearing in mind the price remains the same yet the capabilities have increased dramatically, it certainly deserves to.

If raw synth programming is your thing, there's enough here to last you a lifetime.