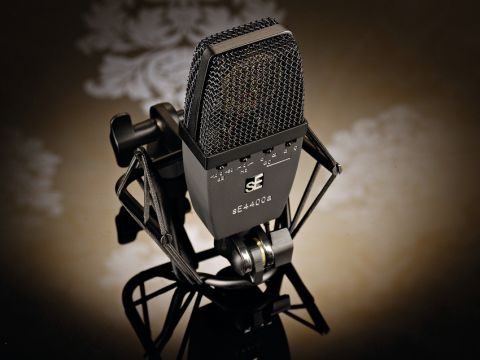 Plenty of options make this a true workhorse all-rounder. The 4400a is a winner.

sE Electronics has successfully forged a reputation for high-quality microphones at reasonable prices, so it was with great interest that we unpacked the 4400a, the latest in a line of mics whose technology dates back to the 2200a, which was released six years ago.

Numbers alone suggest that this is twice the mic of its older brother - could it be?

It's certainly stacked with options. Unlike the 2200a, the 4400a features not one but two capsules, which in turn allows for a variety of polar pattern options. Cardioid, Hypercardioid, Figure of 8 and Omni are all available from the assorted switches on the microphone's body, which immediately means that this is a mic that will have a stab at recording pretty much any source you can think of.

The other on-body switches include twin bass roll-off options at either 60Hz or 120Hz, while there are also two pad options for 'on mic' automatic gain reduction at 10 and 20dB respectively.

The mic capsule itself features twin diaphragms that are one-inch in size and all of this functionality is built into a ﬂat-shaped design which echoes the classic AKG 414.

All of which makes it rather a surprise that the 4400a is so small - compact would possibly be a kinder word but whereas some mics immediately impress with their size and presence, this is such a modest affair that it was with a degree of mild concern that we nestled the microphone into its shock-mount cradle.

Could this little microphone, despite its feature-packed body, possibly deliver a big sound? We needn't have worried.

The sound of sE mics is hard to sum up as it's so transparent and natural, but all we can say is that the 4400a continues sE's tradition beautifully. It doesn't unnaturally colour vocal recordings, but the sound is clear and tight and does what vocal recordings really need to do - leave you with a result that will respond well to any EQ and compression treatment you have in mind for the mix stage.

We tested the mic on spoken and sung vocals, getting excellent results on the spoken voice recordings, as well as on acoustic guitar and violin. Across the board we were impressed, with a very good performance and full-bodied sound emanating from the guitar in particular.

Going back to that shock mount for a moment, this has been specially designed to allow you to get the 4400a into small spaces, so its potential use inside drum skins or as an 'effect capturing microphone' is enhanced greatly by its size.

Whether you're searching for a single microphone to carry out all of your recording tasks, or looking to add to an existing library of models with a microphone you can throw into a bag for a session and pull out for almost any application, the 4400a is definitely more than up to the job.

sE's reputation will be further enhanced with this model and deservedly so, for here is a genuine all-rounder which performs extremely capably with a bare minimum of fuss.