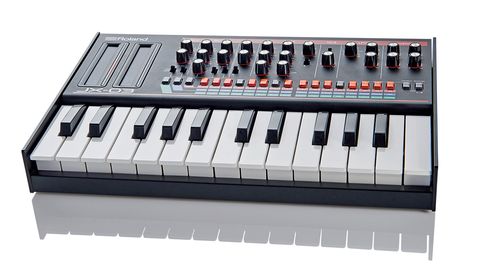 The JX-03 is nicely tweakable (with all the PG-200's controls onboard) and it sounds great.

The JX-3P often gets overlooked as it doesn't say Juno or Jupiter on the front but under the hood lies a largely Juno-based engine (with two DCOs instead of the single Juno DCO).

Due to its basic front panel and lack of real-time control, the JX-3P was relatively unpopular and, at the time of its launch in 1983, Roland was clearly affected by the DX7's increasing popularity and influenced by its simple 'parameter access' system (press a function button and change the value with a single slider).

Although you could program the JX-3P from its front panel (albeit slowly), you could also purchase the PG-200 programmer which sat atop the left-hand side of the board with magnetic strips and featured 24 real-time switches/controls, turning the JX-3P into something altogether more exciting.

The PG-200 is pretty much an essential buy if you grab a JX-3P today, but finding both together is hard - this s where the JX-03 comes in. We imagine the JX-3P will be the least popular of the Boutique models as it's the least 'famous' but, ironically, it's actually our favourite of the three Boutique models.

The limited edition JX-03 is once again built into the same Boutique case as the JP-08 and JU-06 and features a metal-faced, plastic box with 4 x AA battery power, USB/computer buss power with a 2-in/2 out USB audio/ MIDI interface and a 0.5 Watt speaker.

Again, it docks via a ribbon/multi-pin lead with the £75 K-25m keyboard/housing to form a self-contained 2-octave keyboard that can easily be thrown into a bag or backpack for gigging - it's certainly sturdy enough to use on stage and has decent build quality too, with all the panel controls feeling solid.

Unlike the other Boutique models, the panel here is comprised completely of dials and switches and no sliders but, while the dials are pretty close together, the great thing is the JX-03 incorporates all the functionality of the PG-200 programmer right onto the front panel, taking it leaps ahead of the JX-3P.

We dare say if Roland had included all these real-time controls on the original JX-3P it would have been a lot more popular, perhaps even more so than the Juno range!

Architecture-wise there are a few important changes over the JX-3P. Apart from being a 4-voice modelled analogue engine (and using ACB like the other Boutiques, vs the original JX-3P's 6-voice analogue oscillators + digital envelope/modulation engine), DC01 now has an extended range from 64' to 2' (originally 16' to 4') and adds sine and triangle waves, plus pink noise to the original's saw and two pulse wave variations (50% and 10% width options).

DCO2 also has the same extended oscillator range and adds the same additional waveforms alongside white noise, which greatly extends the sonic scope beyond the JX-3P.

The JX-03 works on the same basis as the JX-3P in terms of sound selection, so you'll find the same 32 preset sounds onboard, spread over banks A and B, with bank C dedicated to 16 user-slots (unfortunately 16 fewer user-slots than on the original).

Sounds are selected using the colour-coded ABC bank buttons and the 16 patch buttons that also double as sequencer step buttons and secondary function buttons (like the other Boutiques). Preset names include E.Piano 1, D. Guitar (Digital Guitar) F.Clav (Funk Clav), Planet and Jet, none of which really sound like their names but for 1983 they were pretty good!

Today, they certainly have a simplistic charm about them and we really dig them! SBras2 is a particularly fine warm synth-brass patch, while Str2 is a lovely rich and thick string pad; in fact string and brass pads are where the JX-03 really stands out, although it can do some great growly basses and cutting leads/FX too.

The general tone is nicely defined, rich and warm, with a slightly more musical-sounding/more open top-end than the JU-06/JP-08. Like the Juno series, there's also a resonant low-pass and a separate high-pass filter but this time, the filter is a different design from the Juno-106 and you can really hear the difference in terms of more warmth, growl and sheen.

Finally, let's also not forget about the basic built-in delay (hidden in the secondary functions) and the single button chorus which sounds very similar to the chorus on the Juno series - it really helps bring sounds to life and adds stereo width and animation to static sounds; though, with the JX-03's ability to have two full-range DCOs detuned against each other, it's by no means as essential as it is on the Juno series, though it's still great to have.

To sum up, this is our favourite of the Boutiques. It just has something about it that's inspiring and inviting - it's simple to use but sounds big, warm and friendly, and does great bass, strings and brass but more crazy 'out there' sounds too with the nicely flexible modulation options.

If you're in the market for a Boutique, then be sure to check this underdog out as its charms are plentiful and it sounds fat with a capital F!