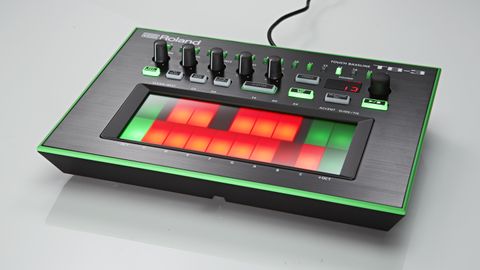 A new take on the 'bassline' concept, the TB-3 packs plenty in for the money and has wide appeal.

The Touch Bassline name on the front of the TB-3 perfectly sums up what this box is about: you play the touchpad to create monophonic basslines and sequences.

While it's not a direct TB-303 clone, it contains a bank of 26 TB-303 sounds (Bank A) that are modelled on the original's circuitry. There's also a bunch of new synth leads, basses and effects onboard that are spread over three further banks (B, C and D).

Like the TR-8 drum machine, the TB-3 uses Roland's new ACB modelling technology (Analogue Circuit Behaviour Modelling), which is designed to recreate the behaviour of the entire analogue signal path, including oscillators and filters.

The TB-3's new 4-oscillator engine is coupled to a 32-step sequencer, which supports 64 patterns spread over eight banks. All pattern edits are continuously saved, and all patterns output MIDI note/timing data, too, which is great for external MIDI layering/archiving.

The sequencer has step and real-time recording modes, plus a Last Step mode (like the TR-8) where you can adjust pattern length from one through 32 steps (accessed by pressing Step Rec and the Value dial). There's also the Shuffle feature (with positive and negative values) for more twisted feels.

The Scatter effect, meanwhile (featured on all the new Aira products) randomises playback, enabling you to create fills, variations and general madness. To finish off, the TB-3 also acts as a 24-bit/96kHz, 2-in/2-out USB audio/MIDI interface, making it easy to use with your PC or Mac DAW.

With its brushed black aluminium front panel, day-glo green surround, tough black plastic case and calming green lighting for the sequencer steps and buttons, the TB-3 mirrors the look of the other new Aira products. As with the TR-8 and VT-3, build quality is excellent for the price point and the six knobs (Volume, Cutoff, Resonance, Accent, and the Value dial) feel solid.

We've no doubt that the TB-3 will stand up to prolonged stage and studio abuse, and it's compact and light enough to throw in a backpack. Also, as its footprint is small, it won't take up much space in your studio.

Navigating the TB-3 is child's play and, as on the TR-8, there's a simple 3-digit LED display. In this case, however, it displays the bank/pattern/sound number, plus tempo, Scatter modes, the step number in Step Rec mode and shuffle settings.

There are also a handful of under-the-hood settings for MIDI channel, clock source, MIDI Thru functionality and pad aftertouch sensitivity. Though there are a few button combinations to memorise for certain functions, there's no menu diving, so you can just get on and enjoy performing. Programming is straightforward, too, though we wish there was a metronome or flashing dot in the display (especially when real-time recording), as it's easy to lose where beat one is.

To program a sequence using Step Record, you scroll through steps with the Value dial (each step has a green light at the top of the panel) and use the red keys on the touch keyboard to enter a note, or a green key to add accents, rests, slides/ties or octave up/down data.

You can also transpose patterns, and there's a handy feature that enables you to chain up to eight 32-step patterns by simply swiping/selecting a group of patterns together using the touch keyboard. This effectively gives you up to a 256-step pattern!

Once you've entered the note/function info on any given step, the TB-3 automatically moves to the next sequential step, and you repeat the process until you have up to a 32-step single pattern. It's very intuitive, and the large touch keyboard is much more playable than the tiny touch ribbon on Korg's Volca Bass. Also, the red keys turn dark when active and recorded notes sound as you scroll through the steps manually, so it's easy to keep tabs on all note/function events within a busy sequence.

Presets one and two in Bank A feature models of the classic TB-303 saw and square waves, and they sound pretty authentic in isolation. However, the TB-3 takes the basic 303 sound somewhere entirely different, as each preset has a specific set of filter, accent and effect settings which are directly controlled by the Cutoff, Resonance, Accent and Effect knobs.

Not only will you find classic 303 saws/squares with drive, delay, reverb and stereo panning, but also stacked/unison and detuned 303 patches which simply weren't possible to create on the original TB-303.

Though the TB-3 doesn't sound exactly the same as an original 303, the important thing is that it captures the essential vibe - the filter models scream, the basic oscillator tones are solid, and the new effects are of high quality, too.

It's a buzz making acid-style sequences and then scrolling through sounds whilst messing with the filters and effects. Also, syncing the TB-3 with a TR-8 is hugely inspiring and addictive, and we highly recommend demoing them together if possible. Just make sure you've got a few hours to spare.

We shouldn't ignore the other versatile monosynth sounds that are onboard, either. The quality and scope of these sounds is great, and the TB-3's general character is warm, chunky and present. You'll find synth leads with LFO effects and panning, futuristic vocal-like basses with distortion, detuned patches with delay, and quirky noises/effects, too.

The downside here is that sound edits can't be saved, but the TB-3 has clearly been designed as a simple 'tweak in the moment' and fun-for-all box that broadly captures the TB-303's vibe but takes it somewhere new. On all these principles it really delivers.

In particular, we found real-time touchpad recording to be a blast, yielding many random yet surprisingly funky basslines. And when you also consider that the TB-3 is a USB audio/MIDI Interface, a handy MIDI controller and a versatile monosynth module, at £250 it starts to look very appealing.

Square lead with delay/reverb and slide

Saws with distortion and filter

Square with resonance and scatter