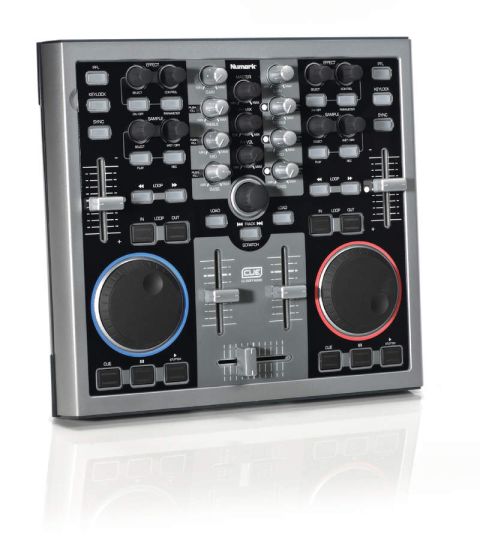 While Total Control has some annoying deficiencies, its basic functionality is sound enough, if you can live with the limitations.

Straight out of the box, it's clear that this DJ-friendly device is an easy installation. Since Total Control is essentially a class-compliant MIDI controller, it really is as simple as connecting the USB cable from the unit to your computer.

Total Control is USB powered, but laptop users will thank Numark for providing an optional PSU.

The Total Control surface neatly packs in two jog wheels, five faders, and over 50 knobs and buttons, taking the place of a conventional 'mixer plus two decks' arrangement. It's even possible to perform almost completely from the control surface itself, selecting songs with the central rotary knob.

The buttons light up to indicate the status of their software counterparts, although it should be noted that this functionality only works with software that sends the appropriate MIDI signals to Total Control. Numark's own Cue application and NI's Traktor both support the unit in this manner.

As well as the usual pitch and volume faders, Total Control is handily equipped with a variety of extras, including loop buttons and 3-band EQ and gain knobs for each deck.

Unfortunately, some of the knobs and faders seem rather light and a little loose. And as convenient as it is to have everything in one place, we can't help but notice how fiddly it can all be. It's all too easy to inadvertently move a control while reaching for something else.

As you might imagine, worst of all are the small jog shuttle wheels. Maybe it won't matter so much if you have child-sized fingers, but the average DJ is likely to get very frustrated.

We'd hope to become accustomed to working with such tiny controls over a period of time, but it's difficult to imagine it ever being as comfortable as working with a regular DJing setup. This is the compromise you make for Total Control's compact convenience.

Total Control is clearly designed primarily as a partner for Numark's own Cue software, but two different control overlays are provided: one for Cue and one for NI's Traktor. LE versions of both are in the box.

Numark has crammed in plenty of functionality here, but it should be noted that Total Control doesn't act as an audio interface. So, while it's highly portable in itself, it's not a one-stop solution for digital DJing.