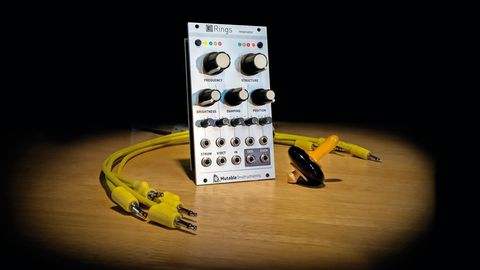 A new module from Mutable Instruments tends to be met with an explosion of fandom in the Eurorack community and Rings looks like no exception.

Following on the heels of the physical modelling beastie Elements, Rings takes Elements' resonator section, and morphs it into a brand new module.

First, as to what it actually is: in all practical senses, it's a complete voice - we never felt the urge to add anything beyond algorithmic reverb.

You can feed it a pitch and gate (or less) and it'll spit out complete, usable sounds at your chosen pitch. Mutable puts it well: "Rings is the bar, the tube, or the bunch of strings you cause to vibrate with an external signal".

Mutable is definitely selling it short. We explored for hours creating a wild little modular orchestra with nothing at all connected to the Rings 'In' excitation input. But when you then account for external, inputted (modular-level) sources as exciters, you effectively multiply its sound generating capability (within the world of resonators, at least) by an infinite amount.

The (clear and well-written) online manual will tell you how each mode works and what all the dials do. Here let's focus on what they translate to in musical terms, and we must beg that you listen to the audio included: hearing is believing - the sounds Rings can make were quite often at
odds with anything we'd imagine a small Eurorack module being capable of generating.

There are no additional effects used in the samples, just external modulation. To briefly mention usability: it is very easy to use; you tap the buttons to cycle the three modes and three polyphony states (yes, more on that shortly), and multi-colour LEDs confirm the state.

Tinker with the (solid, firm) knobs, and react. No manual required, really, though the included printed getting-started guide is a nice touch.

Another remarkable thing is that Rings is polyphonic. You can use it in a monophonic mode with additional harmonics but, by cycling a button, it becomes two or four-note polyphonic.

Now physical modelling leads to a particular sonic palette, nothing like the world of saws, squares and triangles. We're talking bowed instruments, struck metal, glass, and wood. Hollow thuds, mallets, and strings: sustaining pianos, harpsichords, and flutes and reeds... but those are only the extremes.

There aren't detents on the knobs here, so you explore a wide and strange no man's land in-between all these sounds, under full voltage control. In a world of subtractive synths, Rings is a refreshing sounding module to say the least.

Another remarkable thing is that Rings is polyphonic. You can use it in a monophonic mode with additional harmonics but, by cycling a button, it becomes two or four-note polyphonic.

We can obviously only feed it monophonic CV, but with the damping knob up, individual note lengths decay into one another, and then it really is a wild, physical modelling polysynth. When you add in modulation - and every parameter can be modulated - it adds extraordinary life and richness to the sounds, morphing entire textures and timbres, adding ultra-rich-PWM/ chorus effects in some modes, but with a weirdly real-yet-impossible tone.

It is quite capable of making almost overwhelming walls of sound, especially when fed fast and funky sequences, capable of sounding like a furious Steve Reich ensemble of marimba players hammering the open strings of a prepared piano, but in the true spirit of synthesizers it often sounds quite convincingly like a real 'thing'.

And most interestingly, like a 'thing' you can't quite put your finger on. Is that the sound of a five foot square plastic cube being struck with the bar of a marimba? Hmm... No... but it almost could be...

Back to the modes. The Modal mode touches on the sound of harmonic and inharmonic struck handbells and gongs, percussive log hits, 'spectral-processing-y' sounds, and interestingly FM-synth-ish tones we think would work wonderfully for live Techno sets.

The Sympathetic Strings mode created lovely, swirly, piano-like drones, harpsichordy, sitary, plucky, zingy sounds, beautiful violin-y, cello-ish tones, snarls and rasps. It sometimes sounded like running a piano through a stack of phasers, or like struck/tapped strings. The Inharmonic Strings mode can give a tubey vibe (as in pipe), leading into chiffy flute and log sounds, more hollow reedy sounds, and strange harpsichord and bell hybrids.

We were getting sounds that would be right at home in some kind of heartbreaking The Orb outtake, or a Bibio record - just add tape hiss. It takes you somewhere in-between sampling and synthesis, in stereo and with polyphony, and sounds really, really good.

We know of no other single piece of hardware or software that can do everything Rings can, and with such character, class and sonic integrity.

When you consider the infinite potential for CV modulation and external audio input, the sheer value for money here is, frankly, nuts.