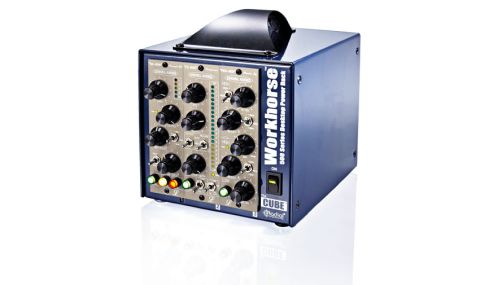 Bottom line? A great unit and a new company to explore.

Lindell Audio has only been around since 2010 but by heading into the 500 series market with the 7X-500 F.E.T Compressor, this company is putting itself in an arena with some serous competition. Fortunately, judging by this unit, it knows what it's doing…

First things first, this module looks good. The front panel has a pleasing style and the knobs and switches feel classy. With the 500 modules' small size, things have to be compact and Lindell have packed it in without losing clarity or logic of layout.

This compressor is based around the classic 1176 design of input and output level controls, plus variable attack and release times. Whereas the 1176 has continuously variable attack and release, the 7X has 3 position switches delivering slow, medium and fast. While this may not offer the extreme flexibility of the original, the times selected work well - during the recordings we didn't find ourselves missing anything.

Once again, the ratios are a simplified version of the 1176. Here you only have 4:1, 12:1 and 100:1, the latter being the equivalent of the 'all buttons in' option of its inspiration. As with the attack and release times, these have been well chosen to arm you with plenty of options without compromising the character of the compression on offer.

In addition to the controls you would expect to have you get two useful extra functions, the first of which being the 'Comp Mix'. In essence, this allows you to blend treated and untreated signals to employ parallel compression. An evermore common sight, this welcomed trend makes accessible to all what used to be the domain of console users only.

Running alongside the above is the 'Side Chain HPF', a three position switch giving off 100Hz and 300Hz respectively. While 100Hz is common, some may consider 300 a tad high. In our experience, though, it delivers a broader scope to the number of sources upon which it would be useful.

For this review, we tried out the module on a wide range of sources within both tracking and mixing sessions. Sporting that great F.E.T character of an 1176, the compressor is excellent and boasts a pleasing colour of its own. The mix knob means you can use that 100:1 ratio to its full effect, too, while still balancing in some of the uncompressed sound's original dynamic to prevent things becoming lifeless.