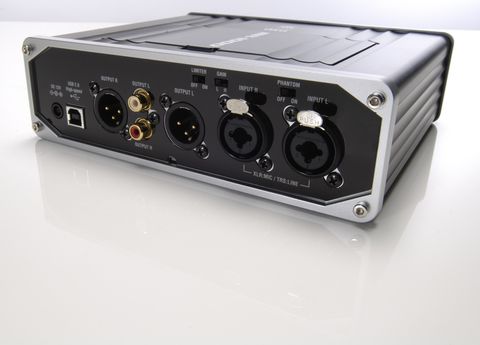 A superb recorder as capacious as it is easy to use. The quality build and sound are where your money goes.

While this latest recorder from Korg is fresh out of the box, we´re only too familiar with its skills. Its little brother, the Korg MR-1, is one of our favourites due to its superb quality, battery life and capacious 20GB hard drive.

So what does the MR-1000 add to the mix? Well, the core internals are the same as the MR-1 - this is still a 1-bit audio recorder capable of committing noise to hard drive at 24-bit 192kHz and beyond. There´s the same options to record as WAV, DSDIFF, DSF and Super Audio CD- friendly WSD. So that´s the same incredible 2.8mHz/1-bit recording that set the MR-1 apart.

The MR-1000 does go one better, however offering a ‘future-proof´ 5.6mHz/1-bit quality that effectively doubles the resolution of today´s standards. Hard drive space has also doubled too - now you´ve 40GB to play with. That´s enough for 60 hours of CD-quality 44.1kHz/16-bit recording and still massive 6 hours at 5.6mHz/1-bit.

In practice the MR-1000 sounds the same as the MR-1. That´s to say it sounds absolutely brilliant. Get your levels right (or trust the auto-settings and built-in limiter) and you´ve signal to noise and bass/treble clarity that are second to none.

In fact, by failing to include a mic this time around (the MR-1 came complete with a bulky clip mic that proved to be a bit duff for musical recordings) they´re forcing you to use your favourite matched pair so, if anything, the MR-1000 sounds even better and that extra resolution really lets your gear shine.

In use the MR-1000 is much less fiddly than the pocket-sized MR-1 too. It features the same screen, menus, and general usage of the smaller machine but now there´s dedicated record level knobs and peak meters replacing the menu options and on-screen displays of the pocket unit.

The MR-1000 is more chunky too. Buttons have a pleasing long throw on them and the loops on the front certainly look the part. Don´t be fooled though, while the shiny chassis may look like metal, the MR-1000 is plastic throughout and the faux rack-able styling is just for show rather than any mounting practicality.

At least the increased back panel real estate isn´t just for show. A pair of XLR/TRS combination sockets for stereo input, now allow you to plug in practically anything and a USB 2.0 port gives easy unloading to a computer.

There´s also switchable Phantom power for mics that require it, and output wise there´s XLRs and unbalanced RCAs for both pro and quick and easy connections. It´s a shame we´re still limited to a stereo input pair though. The option to plug in more mics (four, six even) would have been cool (and possible given the size of the unit).

And while the MR-1 packed an iPod-style rechargeable cell, the MR-1000 needs a gluttonous eight AA batteries if you´re going to use it away from its AC adapter. Some more ins would have also put the MR-1000 in a class of its own. Instead we´ve an excellent quality recorder that gives the comfortable security of a static hardware unit with the option to go portable if you want to.