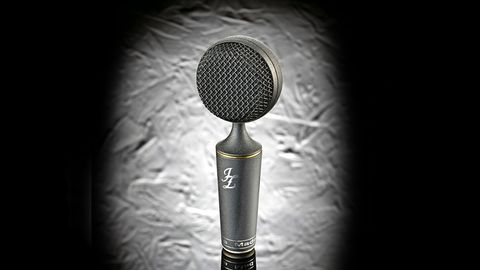 An affordable dynamic mic that can take care of all the tasks you'd use a 57 for, and then some. We like it.

Each producer and engineer will have their own favourite ways to record the sound of an electric guitar amp that might involve a single dynamic, ribbon or condenser microphone or a multiple mic combination of two or more of the same or different genre. Then there's the question of placement…

It doesn't have to be complicated though - there's one particular method that's stood the test of time and is just as popular and commonplace today as it ever was. That method involves using a single dynamic mic, traditionally a Shure SM57, up close to the speaker grille of the particular cab or combo, with a choice of placement on a line from the centre of the cone to the speaker edge yielding useful variations in tonal quality before having to reach for the EQ.

That method works in the studio and it works onstage too, where a flatter-shaped mic like a Sennheiser e609 might be used for less mic stand clutter directly in front of the cabinet.

JZ Microphones' new GTR1 is designed specifically for that guitar cabinet task. It is a side-entry dynamic mic featuring a Neodymium magnetequipped cardioid capsule and has a quoted frequency range of 50Hz to 18kHz, so has an extended top-end over an SM57 which has an upper limit of 15kHz.

The mic comes with a tapered plastic clip that holds it securely, plus a padded, zipped carrying case. Very solidly built utilising an all-metal body with a gunmetal finish, the GTR1 features lollipop styling with a 55mm diameter basket containing the diaphragm fixed atop the tapered neck of a squat body.

Looking at it side-on, the business end of the basket has a flat face that extends ever so slightly beyond the shoulder of its body giving it a really low profile when used up against a speaker grille.

This could allow it to be used without a mic stand if you are not averse to dangling a mic on its cable from the cabinet/combo amp's top surface - no danger of a guitarist kicking the stand out of position with that method of doing things.

So, plugged in and placed on the 10-inch speaker of a vintage Fender combo, we put the GTR1 through its paces alongside a couple of our go-to dynamics for the job: the SM57 and a Sennheiser MD421.

First impressions of the GTR1 were that it captured the guitar sound quite vibrantly. While there was nothing missing in terms of the body of the sound, and the low-end was nicely rolled off, there was plenty of top-end presence that would keep an electric guitar prominent in a mix.

Next to our two test mics, the GTR1 served up a similar but slightly brighter sound, no doubt due to its quite pronounced presence peak around 5kHz.

The extended range further up the frequency spectrum compared to some other dynamics is probably not that useful for a guitar speaker where the response drops off pretty sharply above 6kHz but could be an asset in other instances.

What we have here is a dynamic mic with a brighter character than some popular choices and which may be worth a try on a snare and various other instruments.

We like what JZ Mics has done here - it has achieved its intended result and delivered a microphone that translates the sound of a guitar amp's speaker very well.

Moreover, it's a mic that is suited to a variety of the other tasks that you may wish to use a cardioid dynamic for - especially as its side entry design means that it could slot right in where space is a little tight for the likes of an SM57 to be successfully positioned. If you add one of these to your mic locker you will always find a use for it.