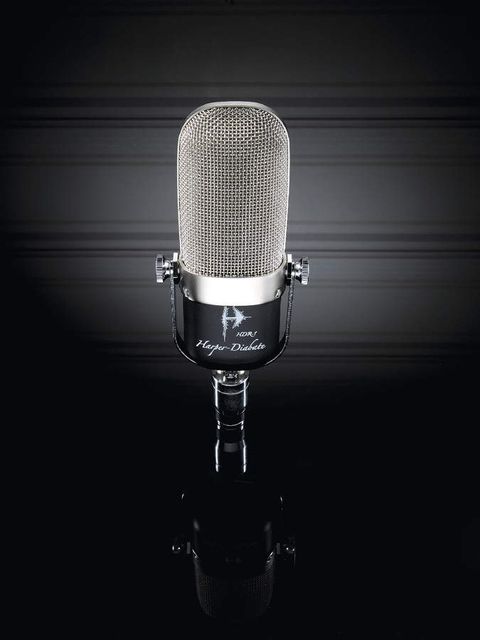 The HDR-1 is retro with a capital R, but delivered at a modern price. Good work HD!

To be honest, you're only likely to buy a ribbon mic once you've got a few others in your collection. There are plenty of reasons for this, not least cost.

But a recent wave of more affordable Chinese-made mics has put them back on the map as a great alternative. Mic newcomers Harper-Diabaté debuted with their impressive valve multi-pattern condenser, and it seems in keeping with their independent thinking that the second mic on their product list is a ribbon.

The HDR-1 follows the traditional route for a ribbon mic and is both passive and a ﬁgure-of-eight pattern. Visually it draws from various vintage designs, including both a captive lead and mid-mounted integral clip.

Due to their inherent design (basically a large magnet and a fragile ribbon), ribbon mics feel indestructible but are of course quite fragile. However, the HDR-1 manages this trade-off quite well, feeling quite slim by contrast to some of the competition.

And when work's done, the whole thing ﬁts upright into its compact ﬂight case.

The specs are common for a mic of this class, but as ever with a ribbon the thing to watch for is the output level (1.8mV/Pa). This will deﬁnitely require some extra grunt from your mic amp, so make sure it's up to the job and not too noisy at high gain levels.

Using ribbon mics requires a little more care than dynamics or even condensers, as they tend to be supersensitive to wind plosives and lower frequencies in general.

The HDR-1 is no exception, and to get up close you need a pop shield. First impressions are that the mic has a well-rounded tone, and makes a great option for speech. It deals well with complex highs, delivering a solid sound and rounding off the edges.

In contrast to a condenser it seems sonically mid-range and slightly duller than some of the ribbon mics I've tried. But if you like to EQ when recording, you'll soon realise that the HDR-1 responds incredibly well to some added high frequencies.

In use, the clip holding the captive lead needs loosening to free up some cable if you want to angle the mic past a certain point; easy enough but a little

fiddly maybe. Also, the mic can be quite susceptible to vibration noise, so you'd probably want to have a low cut available on your mic pre. And as mentioned, plenty of gain was needed (50dB for close-miked speech).

In our 24-bit digital age, doing away with the noise ﬂoors and headroom of analogue tape has allowed us a little extra leeway in other areas. However, we now ﬁnd ourselves looking for new ways to round off the edges.

The HDR-1 is therefore a great 'ﬂavour' tool for the creative engineer, offering an alternative to the tidy crisp sound of a condenser.

The HDR-1 is deﬁnitely towards the darker end of the ribbon mic spectrum, so if you're after one then make sure you bear this in mind. Even so, given the price and ﬁnishing of the mic it's probably one of the best value mics out there. Another thumbs aloft for Harper-Diabaté.