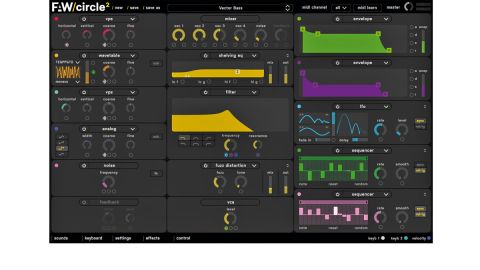 An easy-to-patch semimodular with a new oscillator type and nice new effects, Circle2 is a quality synth at a very fair price.

When Future Audio Workshop first hit the scene with its Circle synth back in 08, we gave it high marks for wrapping a respectable amount of power and flexibility into a user-friendly interface.

We were less thrilled with the mediocre presets, though, which did little to show off its capabilities. Now, Circle is back in its second iteration, with a similarly easy, breezy interface and a few noteworthy new features in tow.

For those who missed it the first time round, Circle is a cross-platform semimodular subtractive synthesiser (VST/AU/AAX/ standalone) with four oscillators (two of which can double as sub-oscillators) that can draw upon a variety of sound generation methods.

These include virtual analogue and wavetable (with user waves), and the range of synthesis options has been increased for version 2, which now offers the new VPS oscillator, which we'll discuss in further detail later.

Your four chosen oscillators can be mixed with noise and feedback generators, pushed through a single or dual filter, and distorted, EQ'ed or ring modulated, pre and post filter.

Envelope generators, sequencers and LFOs are available as modulation sources, and modulation routings are made by dragging coloured circles associated with specific modulation sources to target parameters. More effects can be applied to the final output, and there's an arpeggiator thrown in for good measure.

Circle2's interface has been given something of a redesign, but fans of the original will still feel right at home. Everything we liked about the old interface is still here, from the animated envelopes and LFO waveform displays to the drag-and-drop modulation routing - it's just all a bit easier on the eyes, thanks to its flatter overall appearance.

Without doubt, Circle2's biggest new feature is the VPS (Vector Phase Shaping) oscillator. Developed in association with the audio research group at Maynooth University, the VPS oscillator draws its power from a pair of sine waves.

These sine waves are "glued" together at a point in their cycles, and new and interesting timbres are created by adjusting (or modulating!) that point along with the waves' frequencies.

Tweaking the waves' frequencies and the point at which they join is done using the Horizontal and Vertical knobs, which, aside from the Coarse and Fine-tuning controls, are the only parameters available to the VPS oscillator.

Despite this apparent paucity of controls, it's quite enough to create some unusual and decidedly digital tones, similar to - but nowhere near as harsh as - those produced by Casio's legendary CZ-101 synth, which also did its thing by fiddling with the phase of its oscillators. It's too bad there's no visual display of the resulting waveform, but some might see that as a fair trade-off for a tidy interface.

The VPS oscillator sounds good, providing everything from thick, organ-like waves and sharp, ringing timbres, to exotic plucked sounds and more. We achieved some particularly crazy sounds modulating the parameters of one with another.

Unfortunately, though, the VPS oscillator lacks the facility to act as a sub-oscillator, so there's no way to use it as an LFO - a feat that is possible with the other oscillators. It can't be used as an oscillator sync master, either. Bummer.

There are a couple of nifty additions to Circle's Master Effects arsenal, the best one being the Bucket Delay. Based on the gritty, murky sound of an analogue delay circuit, this is ideal for old-school dub echoes and spooky, modulated siren calls.

You can control the delay time, feedback amount, dry/wet mix and output level, sync it to host tempo and modulate all of its parameters. It sounds like the real deal and is a blast to play, but we're scratching our heads as to why it doesn't incorporate a filter of its own.

The new tube distortion effect features Drive, Crunch, and Low and High Cut filtering controls. All of these settings can be modulated (along with the Mix and Out parameters).

As ever, distortion works best with certain types of complex timbres, but when you need a bit of that vintage vibe, this one delivers. We got some excellent results using it post reverb.

Other improvements are less obvious. Circle2 works in 32- and 64-bit hosts, and the audio engine has reportedly been completely rewritten, though to our ears, the sound quality was always excellent anyway.

The audible differences are slight, but the developer assures us that tweaks have been made to improve both the filter and the low end response. The new interface looks good, too, and is now Retina/HiDPI-ready.

While all of Circle2's new features and enhancements are effective and significant, to be blunt, we were expecting a little more from a full version update, especially after waiting seven years for it - a lot has changed in the soft synth world in that time.

Still, the upgrade is free for registered owners (perhaps it should have been called v1.5), and it's still an excellent synth that we have no hesitation in recommending. It doesn't hurt that the price has been lowered since its original release, either.