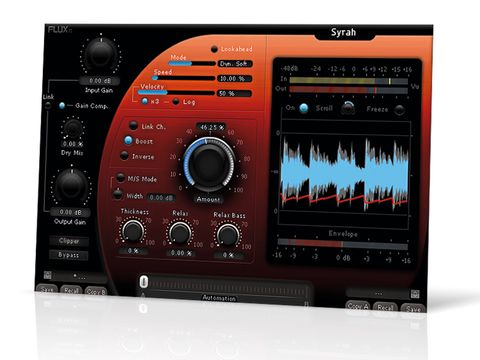 Syrah is one smooth customer, offering a unique, refined take on dynamics.

For dynamics processing, most of us instinctively reach for a compressor, but there are other options - Syrah, the new plug-in from Flux, is one of them.

It's different from a typical compressor in that not only does it adapt its processing to suit the source signal, but it uses both level-dependent compression/de-expansion and that which is level-independent - ie, it reacts to musical events such as transients, rather than the signal exceeding a certain level.

What sets Syrah apart, though, isn't so much the processing methods as the way in which they are labelled and implemented. A couple of examples include the x3 control, which multiplies the release range by three, and Log, which engages logarithmic calculations for the release time, giving faster responses.

Many of the front panel controls affect a number of under-the-bonnet parameters at the same time. Syrah's Modes are an example of this - eg, the Dynamic Soft option automatically controls the release, compression, clipper and de-expansion (as well as the Relax parameter), giving a bouncy sort of compression that doesn't crush the dynamic range or sap the life from the signal.

"What sets Syrah apart isn't so much the processing methods as the way in which they are labelled and implemented."

Following Syrah's main dynamics section is a smooth clipping function, which can also be adaptive, depending on the mode selected, further contributing to the crisp processing. There's also a Mix knob for blending the effected and raw signals.

To help you understand what Syrah is doing to your signals, there's a waveform display and a graph that shows the gain reduction amount. This display offers zoom and freeze functions for almost unprecedented visual referencing.

We found that Syrah works best on instruments that demand a measure of subtlety, such as guitar, piano and vocals. It's cool for creative effects, too, as the numerous modes and options can make it respond to the material in subtle but distinct ways. On Flux's recommendation, we even used it on our master bus to help gel our mix.

The mid/side mode is a boon, too - it did a sterling job on a reverb bus, thickening and widening the signal pleasingly.

One fantastic feature of Syrah is its ability to morph between two presets, which enables you to add exciting changes throughout your track, as the Morph parameter can be automated. However, its greatest strength for us was for A/B comparisons.

Many plug-ins, particularly dynamics ones, offer A/B functionality, but the act of morphing gently between the two seems to give a far more useful comparison, and all to an extent that we simply couldn't have predicted until we'd tried it. Syrah even sidesteps the normal A/B problem, whereby any change in perceived volume colours perception (because 'louder sounds better').

Whether you're editing Syrah itself or another plug-in inserted before it, its automatic levelling function counteracts volume differences, enabling you to judge your changes based on sonic quality, not volume.

For a really in-your-face result, Syrah's not going to be your first port of call - it just doesn't squash things as viciously as less sophisticated compressors and limiters. But on the flip side, it can almost work like an enhancer, seemingly brightening signals rather than just making them louder. We found it to be better at phattening groups of sparse tracks (such as a kick, bass and hat) than entire mixes, as it enables them to breathe and pulse nicely.

If big, bulging beats are your thing, Syrah's subtleties could be lost on you, but for super-slick dynamics handling, it's a winner.